The Original Series No. 69

6769.4
Captain Kirk and his crew are caught in the middle of a deadly civil war — The Patrian Transgression is a Star Trek: The Original Series novel by Simon Hawke. It was published in April 1994, the 69th book in the Pocket Books series of numbered TOS novels.

The USS Enterprise is sent to Patria I to discuss that world's application for Federation membership. But Captain Kirk and his landing party soon discover that the Patrians have a strict system of laws—enforced by a telepathic police force.

In the midst of this startling revelation, the crew finds themselves in the middle of Patria's growing political unrest. Caught between the Patrian police and a deadly group of terrorists, Kirk, Spock and the others must fight for their lives on a world where their thoughts make them criminals—and all crimes are punishable by death.

The Enterprise travels to Patria I for a diplomatic mission. Investigating claims of a prime directive violation, disruptors sold to the world, the crew teams with Joh Iano. Iano, a 23rd century Patrian man, was a police officer holding the rank of lieutenant and, unknown to the crew, a genetically engineered member of the special telepathic police contingent. Specialist Andrew Muir beams down with Yeoman Trish Jacob to aid Kirk's landing party on Patria I. Muir brings Rigellian brandy and glasses to share with with them and their liaisons. He deciphers their computer systems and quickly learns more about Patrian culture than the rest of the team up to that point, including details on their surgically-endowed telepathy and their Mindcrime Unit. Muir links a universal translator to Patrian equipment and helps repair a deflector grid on the surface. He aids the liaisons while interviewing local police, hoping to find some overlooked detail in their investigation about rebel activity. When Spock was taken by rebels, Kirk bluffs using a non-existent general order, and Muir worries that Kirk might be court martialed for that. Kirk's captain's log for stardate 6769.4 notes that the crew attended funeral services for Lieutenant Joh Iano. 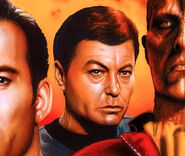 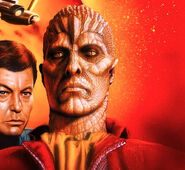 USS Enterprise at Patria I. 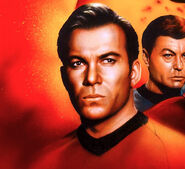