The Peacekeeper, Part Two: The Conclusion

This article is about the TOS comic story arc. You may be looking for TNG novel: The Peacekeepers.

8637.7 - 8639.2
The Peacekeeper, Part Two: The Conclusion was the double-sized 50th issue of DC Comics' second series of TOS comics, published in July 1993. It concluded The Peacekeeper story arc, which was written by Howard Weinstein and penciled by Rod Whigham. The story dealt with an investigation surrounding the disastrous test of a protomatter-based weapon of mass destruction which appeared to have killed Pavel Chekov and Montgomery Scott.

Captain's log, supplemental:
Two hours have passed since the destruction of the Pacific... And we still have no explanation for the accident or the intense and persistent radiation forcing us to remain clear of the site.

Captain's log, supplemental:
With Starfleet extradition procedures waived, I have remanded the Aegis rebels to Gary Seven's custody, and they've been sent home for trial.
As for the Aegis itself... Their unpredictable intervention activities make me... Uneasy. However, there's not much we can do to stop them.
Our philosophical differences remain... unresolved.

"It may be completely new, Jim... but you aren't perfect" 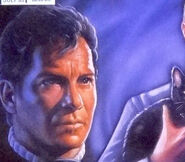 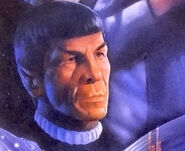 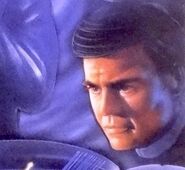 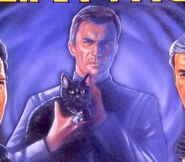