30:19:12
A secret space lab wants Mr. Spock's help—as a guinea pig! — "The Perfect Dream" was the 26th issue of Gold Key Comics' 1967 series of Star Trek comics. The issue consisted of 25 pages of story illustrated by Alberto Giolitti and was the second of five stories written by John Warner.

"The Perfect Dream" … finds the denizens of a planet living in a Shangri-La as beautiful as John Hilton's Lost Horizon. But the planet is really a gigantic starship, created by a powerful alien who used his own cells to clone a "perfect" population. The alien wants cells from Spock to broaden the gene pool.

Stardate 30:19:12
The Starship Enterprise was on data maneouvers when we sighted a strange planet. The planet seemed to be part of no system; it had no orbit and moved in a straight line. The landing party I took down included Spock, helmsman Sulu, medical officer Chapel, communications Lieutenant Uhuru and security officer Manning.

The planet was one of great beauty. The animals were hostile and we were saved from attack by the inhabitants of the planet. The inhabitants appeared to have a culture similar to that of our own ancient Japanese and were ruled by their leader, Yamoto. It was observed that large numbers of people looked alike. Out of 100 people I saw, only six different faces were in evidence. The one named Oshino acted as our guide and it seemed that Rifas-L was a planet of harmony and perfection. But somewhere in me there was the feeling that something was wrong.

As we continued our investigations, it appeared that the people had no knowledge or memories of their childhood. It was also noted that not a single child was to be seen on Rifas-L. Spock requested that he should go out alone to investigate a building he had seen which had registered strange readings on his tri-corder.

Meanwhile, the rest of the party were being entertained by our friend, Ekoe, who presented us with a model house he had created and asked us if he could leave with us on the Enterprise. At the very moment of his question, a party of warriors called the Collectors arrived to arrest Ekoe and execute him for being the creator of the model straw house. The charge against him being that in order to have a creative instinct he must be a mutant.

Although Federation regulations forbade us to interfere, I felt that this atrocity should be prevented. After a futile attempt to stop the arrest, we were overcome and forced to watch the mass slaughter of people whose only crimes were age, disfigurement or intelligence… (Kirk's Testimony, Star Trek Mighty Midget edition)

Oshino thinks mutations and the elderly should be destroyed, yet she has strange visions of being scooped out of a vat with a grappler. When Collectors come to arrest and execute Oshino and the landing party, they are stunned with phasers. Meanwhile, Spock enters a cloning laboratory and discovers they aren't on a planet, but a vast starship. He meets overlord Yamoto, founder of the programmed society. While he'd used his own cells to create the Third Dan males, cells from the five other types of people are stolen. He paralyzes Spock, intending to collect Vulcan cells to broaden the genetic base.

When Spock can't be reached, Oshino leads the landing party to a forbidden door within the Palace of Life, behind which they discover the clone lab. Realizing her life is just an experiment, Oshino goes berserk, tearing at the equipment in a rage. Kirk, Chapel and Manning stop defensive robots with their phasers. Spock stumbles through a door toward them, recommending an immediate retreat. Oshino grabs Kirk's phaser and tells him she will hunt down Yamato, but everyone else has to leave. She then collapses the ceiling between them with the phaser. Before a pursuing group of Collectors can stab them with swords, Kirk hails the Enterprise and beams up the landing party.

The Enterprise pulled out – I had intended to take this situation to the Federation for consideration. Once again we can only imagine what followed! Spock thinks Oshino rushed in on Yamoto…

Oshino activates the planet-ship's self destruct system to destroy Rifas-L.

That is what I know or have derived from known facts. It is my unwavering belief that Federation intervention cannot be blamed for what happened! We may have been the vehicle, but the process was inevitable! 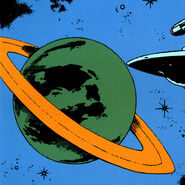 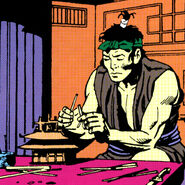 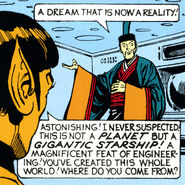 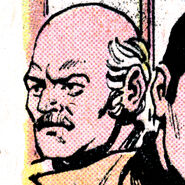 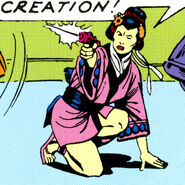