The Peril of Planet Quick Change

The Peril of Planet Quick Change

2106.7
An alien form invades the Enterprise through Spock's mind! – "The Peril of Planet Quick Change" was the fourth issue of the TOS Gold Key Comics series. Published in June 1969, it was the fourth story written by Dick Wood and the second drawn by Alberto Giolitti. The story reran in issue 35 in November 1975 with a new painted cover.

It was a world in deep space that even the galaxy-wise crew of the Enterprise had never dreamed of — a planet that convulsed, sprouted foliage, mountains and water like a living thing! And only Mr. Spock could hope to save this alien globe that had the space pioneers trapped upon it!

Spock has discovered a planet that rapidly changes its chemistry. He also detects traces of tiantianium on the planet. Kirk, Spock, McCoy and Johnson beam down to the surface, where an upheaval unearths the ruins of an ancient civilization. Strange lights emerge from the ruins and attack the landing party. Phasers are ineffective against them, but they retreat anyway, and after swirling around Spock, they vanish.

Spock tells Kirk that he has calculated a way to extract the tiantianium ore, but it requires returning the planet's chemistry to its original state. He requests special materials from the Enterprise and begins constructing an unknown device, but is strangely unwilling to discuss the details of his plan. He is actually being mentally influenced by the lights, which are the native Metamorphans; they were transformed into energy beings centuries ago and want to use the device to return to their original forms.

The device succeeds, and the Metamorphans become physical again. In gratitude, the Metamorphan spokesman, Zarman, allows the Enterprise crew to extract two hundred pounds of tiantianium ore. However, one Metamorphan, Textra, has stayed in Spock's mind, seeking escape, knowledge, and adventure. Spock refuses to allow this to happen, but Textra prevents him from informing the others of his presence. Spock is placed in sickbay, but he leaves and uses the transporter to to destabilize his body, leaving Textra with nothing to possess. Afterwards, he tells Kirk and McCoy what happened. 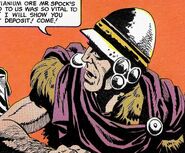 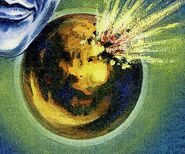