unknown
"The Perithees Alliance" was an 18-page Star Trek: The Original Series comic strip. It was the 32nd weekly story arc in the UK comic strips series, published in nine installments in Valiant and TV21 in 1972. In this story, the Federation seeks an alliance with the Perithees system.

Omnibus teaser
Hoping to secure an ally against the Romulans, Kirk welcomes Ambassador Sork of the Perithees Planetary System to the Enterprise. The Romulans, however, abduct the dignitary from Kirk's care to sabotage negotiations.

Ambassador Sork visits the bridge of the USS Enterprise. When an unidentified vessel drifts into range, it piques his curiosity. Kirk reluctantly agrees to let him accompany Pavel Chekov's boarding party. The four people enter an airlock to find the spacecraft undamaged and empty. Suddenly the ship blasts away, firing a weapon that temporarily disables the Enterprise.

Admiral Voysey and Kirk agree that the vessel had been a trap, and that only the Romulan Empire would benefit from a failed alliance. The Enterprise heads for Tekton, the nearest Romulan-controlled planet. Once in orbit, Spock detects heat signatures consistent with a rocket landing. Kirk and Spock dematerialize in the transporter, but at the last second Montgomery Scott realizes their coordinates are locked onto a volcano and quickly deflect the beam. They rematerialize in a jungle, alive but unconscious, and are found by sentient ape-like Tektonians. After recovering, Spock realizes the apes are non-hostile, but his communicator is damaged and he doesn't have a universal translator. Soon afterward, a probe from the Enterprise spots Kirk and Spock with the apes. Hikaru Sulu beams down with a translator, and after a discussion the Tektonians lead the three officers to a Romulan base.

Scheming to derail an alliance, the base's commander had allowed Chekov and Sork's team to escape from their prison cell, but booby-trapped a nearby rocket. Sork will appear to die at the hands of the Federation. Kirk, Spock and Sulu sneak into the base and locate Chekov and Sork. Together they dodge weapons fire and escape in the rocket. But Kirk smells a trap. Kirk locks the rocket's helm controls, and then all seven beam back to the Enterprise —the rocket flips over and crashes into the base.

Sork appreciates Kirk's resolve and agrees that they should become allies. 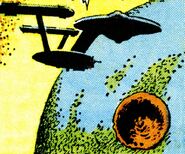