The Planet of No Return

The Planet of No Return

"The Planet of No Return" was the first licensed Star Trek story. Published in July 1967, it launched a 61-issue TOS comic book series from Gold Key Comics. Written by Dick Wood and drawn by Nevio Zaccara, it depicted the USS Enterprise's visit to a world of dangerous plant species. The story reran in issue 29 with a new painted cover by George Wilson. It has been extensively reprinted in English and at least eight other languages.

It was the strangest civilization in all the known universe — more awesome than the mind of man could conceive! And the expedition from the star spaceship USS Enterprise soon regretted their decision to explore K-G...

Captain's log, stardate 18:09.2
Enterprise carrying out exploration mission through Galaxy Alpha. So far we've seen no indication of life anywhere in the galaxy.

The Enterprise's space scope detects a fertile green planet. Scotty comments that it looks "Kelly Green" and Captain Kirk orders a landing party to be assembled. While approaching the planet, the Enterprise passes through a mist, within which float plant spores which fasten themselves to the hull and quickly penetrate the ship. The spores cause the laboratory guinea pigs to transform into tree-like plants which attack Spock and Dr. McCoy, but are soon destroyed by security guards.

While Spock investigates how the transformation occurred, Kirk leads the landing party to the planet, which has been named K-G. While exploring, Crewman Hunt is exposed to spores and transforms into a giant plant. The rest of the landing party are nearly devoured by a carnivorous plant, but the transformed Hunt sacrifices himself to save them. After a brief funeral, the party discovers that K-G is inhabited by intelligent plants. They escape from attacking trees and take shelter in a nearby cave, but Rand is grabbed by a vine and dragged away. The others chase after the plant, which deposits her inside a large enclosure where animals are grazing.

The landing party uses their phasers on the wall of thorns which surrounds the enclosure, but the thorns regenerate as fast as they are destroyed. Kirk sees the plants herding the animals away, and after gaining a vantage point from a rock pinnacle, they see that the plants consume the animals for food. Kirk calls the Enterprise and has Spock fire a pinpoint phaser beam at the thorn wall, destroying it and allowing them to rescue Rand from being eaten. Kirk orders Spock to beam them back up to the ship just before the plants can infect them with more plant spores.

On the Enterprise, Spock tells Kirk that the spores pose a threat to life on all other planets in the galaxy. They therefore use the ship's weaponry to destroy all life on K-G.

Captain's log, stardate 18:10
We are orbiting the planet Kelly Green, performing what will be our last duty here… Total destruction—a mission that must be fulfilled before we can continue our tour of research through the vast reaches of the universe… 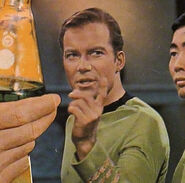 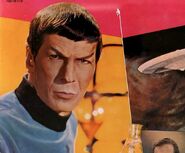 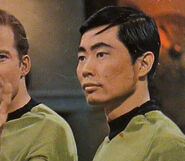 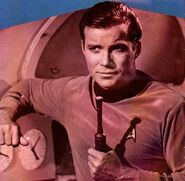 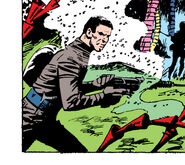 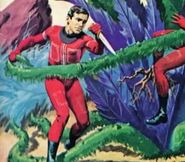 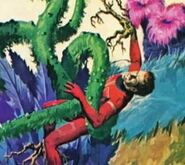 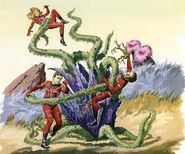