The Primate Directive No. 5

Captain James T. Kirk and the crew of the U.S.S. Enterprise have pursued Klingon warships through an interdimensional portal, finding themselves on a parallel Earth where mankind has become an inferior species and apes rule the planet! Searching for Klingon interference, they've encountered Colonel George Taylor, a timelost astronaut from 20th century Earth who's hell-bent for vengeance for what's become of humanity. Kirk and Taylor have come to an uneasy truce, and Taylor has agreed to help stop the Klingons from setting off a civil war among the Apes. When Taylor and the Enterprise crew search the Klingons' base of operations, they discover evidence of Klingon Commander Kor's next move: Assassinating gorilla General Ursus to clear the way for their hand-picked puppet, General Marius, to conquer Ape City...

Before Kor can fire at Ursus, a well placed shot knocks the sniper rifle out of his hands. Out of visual range, the Enterprise crew attempt to make themselves scarce only to wind up blundering right in front of their foe who is completely unsurprised to see Kirk. Though the two groups engage in melee, it is a numbers game with the Klingons soon falling. Deciding to cut his losses, Kor and his subordinate transport away prompting Kirk to issue an order for emergency beam-up should the Klingon ship head for the portal. Unseen by all, Cornelius surreptitiously grabs Korenman's tricorder.

Back on the field, Ursus and Marius also find themselves engaged in melee combat with the former emerging as triumphant, even with Marius's attempts to introduce phasers to their fight. Watching it all, and the support lavished on Ursus, Zaius and Zira can only wonder if catastrophe has merely been delayed. Cornelius then calls to Zira to inform her that their visitors are leaving. Spock and Kirk's scans of the city turn only one highly improbable fact: the Klingons have all left.

As the sun sets, the away team says their goodbyes to Cornelius and Zira who promise to keep the truth of what happened to themselves. After all, who would believe them? As the two depart, Kirk offers George Taylor a spot aboard the USS Enterprise. The man boldly declines however. He set out from his Earth to find something better than man, a new destiny to forge, and though his quest has brought him full circle, he is still convinced that destiny lies ahead of him. Instead, all he asks is to be put back on the remains of Liberty Island and to pretend this whole mess never happened. Though McCoy offers provisions, Taylor again declines, confident he can survive on his own. Goodbyes finish not a moment too soon, the Klingon ship has finally come out of hiding.

Stepping onto the bridge, Kirk is soon hailed by Kor who, far from being bitter, is eager to challenge his opposite in a warrior's duel, far away from the constricting hands of the Organian Peace Treaty. The chase lasts for three days until the enemy ship is spotted heading for Saturn. As the Enterprise closes the gap, two D7s emerge from the gas giant's rings. Though a fearful sight, their shields have been hampered by the rocks, leaving them easy prey. In light of such a loss, Kor opts to run back to the portal. As the two ships streak over Earth, the entire planet lights up and goes up in flames. Spock registers that somehow, a massive cobalt bomb was ignited, burning off Earth's atmosphere. As the crew numbly wonder if they caused such a horror, Sulu reports Kor entering the event horizon. Snapping back to reality, a weary Kirk can only order pursuit and to ready weapons to destroy the portal once they're through. They've done enough here.

In Taylor's ship, Zira, Cornelius and Milo watch their homeworld burn. Cornelius latches onto the idea of using the ship for time travel, as Taylor did, only for Milo to irritably remind him that the craft can only go forward in time. Reaching into his bag, Cornelius pulls out the stolen tricorder, believing the "slingshot effect" could be of some use.

Captain's log, supplemental.
We're still chasing Kor's ship after three day. We've had some close skirmishes but it's just cat-and-mouse he's playing with us, waiting for us. 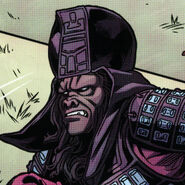 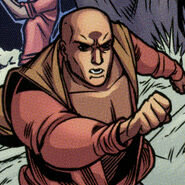 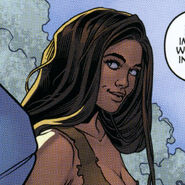 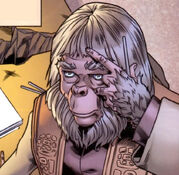 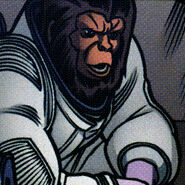