The Prisoner of Vega

The Prisoner of Vega

The Original Series (Random House) No. 4

unknown
The Prisoner of Vega is a Star Trek: The Original Series young adult novel, the last of four published by Random House in 1977. It was written by Sharon Lerner and Christopher Cerf with illustrations by Robert Swanson.

Copyright page
Captain Kirk and the Enterprise crew confront villains from the Klingon Empire who are holding the beautiful ruler of Vega prisoner.

Invited to sign a mining treaty for the essential metal korium, the USS Enterprise approached Vega III and hailed Queen Vanadala, whom Kirk had met before. Strangely, she fired on the Enterprise and then demanded that they depart within two hours. Since the inhabitants were peaceful and did not have that kind of weaponry, Kirk, Spock and Leonard McCoy beamed down to investigate, leaving Montgomery Scott with orders to retrieve them in exactly two hours.

Three Klingon guards blocked their entry to the palace. The landing party stunned them, stole their uniforms and helmets, then infiltrated the palace. They spotted a Klingon spacecraft being loaded with korium. Spock used a Vulcan nerve pinch to knock out a guard by the throne room. They entered, encountering the occupation force's leader, Commander Kalor, whom Spock had met before. Kalor ordered the men to take off their helmets. He immediately recognized Spock, realized the others were Kirk and McCoy, and seized them. They were to be executed before a firing squad in one hour.

Soldiers threw them into a prison cell with Vanadala, who apologized for their circumstances. The Klingons had arrived shortly before the Enterprise, and she had no way to stop them. An hour later, the four were removed from their cell. Kirk pointed out to Kalor that killing them would be a treaty violation, but Kalor scoffed at their treaty, reveling in the idea of renewed war.

As the prisoners were lined up to be shot, Kirk stalled for time, offering to trade their lives for details on a more efficient mining technique. Monitoring his chronometer, with only seconds left, he asked if he could say good-bye to his crew. Those were pre-arranged code words for Vanadala, who quickly moved beside Kalor. At that moment, all five were beamed aboard the Enterprise. Security guards disarmed Kalor and took him to the brig.

Vanadala said her people would be able to take care of the remaining Klingons now that she was safe. She signed the mining treaty, then beamed back to Vega III. The Enterprise departed for Starbase 2, where Kalor was to be turned over to the authorities. 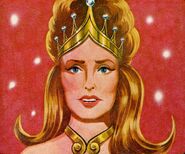 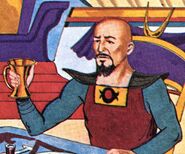 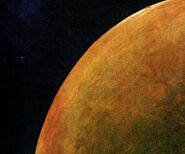 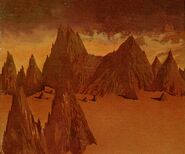