19:27.4
The PsychoCrystals—they glitter with death! — "The PsychoCrystals" was a Star Trek: The Original Series comic book story published by Gold Key Comics in 1975. It was the 34th issue of their TOS series of comics, the 8th of 22 stories written by Arnold Drake and the 31st drawn by Alberto Giolitti. In this story, a landing party from the USS Enterprise discovers a world of telepathic crystalline lifeforms.

An innocent scientific expedition becomes a subterranean nightmare when Captain Kirk and the crew of the Enterprise find themselves racing against the clock of their own executions.

Spock observes that planet Alpha 23-C is rich in industrial minerals, so Kirk, Leonard McCoy and Montgomery Scott beam down to conduct an overnight topographical survey. The trio split up to climb a plateau. Scott spots a beautiful outcropping of gemstones that he thinks will make a good necklace for a woman he likes, but before he can chop off a sample with a pick axe, it shoots him with a laser beam. Peering into one gem, he is strangely psychoanalyzed — facets reflect various sides of his personality, including fantasies as a heroic Highlander and secret agent as well as images of himself terrified by witches as a child. He yells before passing out. Kirk revives him, then finds McCoy in hysterics.

When they camp that evening, Kirk awakes in paranoia and begins strangling Scott. McCoy stirs and quickly stuns Kirk. Realizing they aren't prepared for this type of psychological assault, Kirk decides to return to the Enterprise, but their communicator signals are jammed. Suddenly a bipedal crystalline lifeform approaches. Scott reaches for his phaser but the being, named Izor, fires a laser beam from its head and disarms him. It calls the landing party kidnappers and attempted murderers, revealing that the crystal gems are its species' infants. Kirk surreptitiously drops his communicator as Izor leads them into deep caverns.

Captain's log: star date 19:27.5. Mr. Spock's "sophisticated crystals" have turned out to be living things! And we are being marched to their underground civilization!

They emerge into an underground crystal city paradise populated with the crystal lifeforms. Despite Kirk's protest of innocence, their president condemns the humans to die. Later, they are brought back to the president's office. Kirk observes from a periscope that Spock has beamed down and begun to inspect the gemstones. However, the infants reflect only geometric images, unable to spark emotions from the Vulcan. Nonetheless, Spock is captured and reunited with the landing party.

The president cannot read their minds to confirm that they are innocent, as only their children have strong telepathy. Suddenly, a large crystalline dinosaur, a rampaging slourda, disturbs the city's peace, retreating tentatively when spears are thrown at it. The dragon is immune to natives' thoughts which generates laser beams, as people are from repeated exposure to bacteria, but Kirk believes that he, Spock, Scott and McCoy can act like foreign germs. Spock proposes to channel new thoughts through one of the crystal infants, but it means carrying a baby gem into danger. When they next encounter the slourda, Spock projects scientific concepts though the gem such as the formula of sulfuric acid, E=MC2, Newton's Third Law of Motion, and theories behind rocket engines, which shatter the dragon into pieces.

Having demonstrated their good intentions, the landing party is allowed to leave. Kirk and Spock provide the natives with scientific texts to produce enough new thoughts to keep them free of slourda forever. 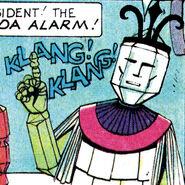 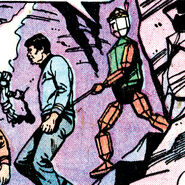 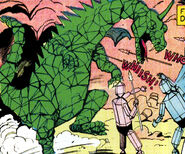