The Q Conflict No. 3

As the clash of the godlike beings continues, the captains face off in a series of war games that become much more lethal when Q introduces a fifth competitor – a Doomsday Machine! The biggest Star Trek crossover ever continues here.

Before the next task starts however, Q is willing to grant everyone a brief moment of team building. As he goes off however, the other three entities gripe about Q's tendency to take charge of these meetings. And when Trelane goes off, the Metron and Ayelborne continue to complain about his childish behavior. It soon transpires however that the Metron and Ayelborne do not trust their host, having only agreed to this because it will minimize the war's collateral damage to the galaxy. And neither one actually trust Q to keep his word should they emerge victorious.

Meeting with Picard, Q falls right back into bickering with the captain. Trelane (in a very Q like manner) reveals he is only here because it's in his best interest to be while the Metron and Ayelborne can only encourage their team to play along for now (and they must not throw the challenges) for the sake of the galaxy.

Q reclaims everyone's attention and, having been eavesdropping, allows Trelane to create the next challenge. The godling's challenge of a no-holds barred free-for-all violates the conditions that the captains agreed to. Instead, Trelane opts for a game of capture the flag with Kirk and Janeway as the red team with Picard and Sisko as the blue. Since no weapons are allowed, the flags will instead be hauled via tractor beam.

Much to Trelane's ire, he soon learns that capture the flag without weapons is an intensely boring game. Fortunately for Trelane, while Q promised not to interfere, he did not. With a wave of his hand, Trelane adds a new player to the chess board, a doomsday machine.

The USS Voyager quickly moves in to attack but its phasers cannot pierce a solid neutronium hull. The more nimble USS Defiant tries to move in but a glancing blow from the monster disables its warp and impulse drives while cutting life support down to 50%, forcing the USS Enterprise to tow them out of harm's way while the monster continues to harass Voyager. At Spock's suggestion, the USS Enterprise-E fires quantum torpedos, the warheads actually causing damage. Unfortunately, the machine's only weakpoint is its maw. To destroy it, someone will have to charge it head on, a task Picard volunteers for. With every ship in position, the torpedoes fly leaving the beast no time to defend or repair itself, sending it to a fiery death.

With a flash, everyone is back in the garden, Q claiming victory on the basis that the Enterprise-E fired the killing blow. Inspired by the planet killer, Q decides the next task will feature, much to the horror of Sisko and Kira, the Prophets. 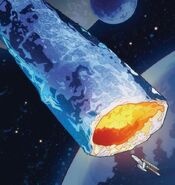 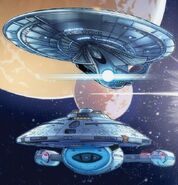 Retrieved from "https://memory-beta.fandom.com/wiki/The_Q_Conflict,_Issue_3?oldid=663317"
Community content is available under CC-BY-SA unless otherwise noted.