As the ships warp, everyone meets aboard the USS Voyager where Kirk hits the nail on the head; how can they hope to fight back against a god? Amanda reveals herself and hands over a Q weapon, capable of not only killing Q but reshaping itself into anything the user desires. And though B'Elanna Torres is running into trouble getting the Gateway Engine into perfect working order, Wesley Crusher arrives (much to Beverly's delight) and reveals he and the Traveler can stabilize the device. With everyone, literally everyone, is armed, Picard leads the charge through the portal, the Traveler sending Wesley and Amanda to aid them. 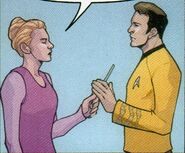 Q weapon,
Add a photo to this gallery