The Original Series (IDW ongoing) No. 35

"The Q Gambit, Part 1" was the 35th issue of IDW Publishing's 2011 ongoing series of Star Trek comics, written by Mike Johnson. This is the first of six parts in The Q Gambit story arc, illustrated by Tony Shasteen.

Previously in Star Trek…
Following the events of Star Trek Into Darkness, the USS Enterprise has embarked on a new five-year mission of discovery. En route to the unexplored star system Menzies 216, Captain Kirk and his crew are about to encounter a new challenge for which nothing they have experienced thus far could possibly prepare them…

It is the year 2387. Through the sacrifice of Ambassador Spock, the Hobus supernova has been collapsed, dragging both the old Vulcan and Nero through the singularity. The USS Enterprise-E sets a somber course home, only being able to thank their absent friend. As Jean-Luc Picard sits in his quarters, he is visited by Q. After taking a moment to recommend chamomile tea and enjoying the feel of the ambassadorial uniform compared to the captain's, Q reveals that Spock is alive, having fallen through the black hole into an alternate timeline. Though Q attempts to inform Picard of events in that timeline, Picard cuts him off, believing that none of the various timelines in the multiverse should have any knowledge of each other. Annoyed, Q reveals he had come for Picard's counsel as Spock has set off a chain of events that will doom that timeline. But since the former captain is uninterested, Q takes his leave for the other timeline despite Picard's attempt to call him back.

2261, the USS Enterprise has arrived at the system Menzies 216. Exiting onto the bridge, Spock briefs James T. Kirk on the system before Nyota Uhura detects a distress beacon from the SS Smallwood. As the Enterprise moves to assist, five Klingon vessels decloak and begin attacking the Enterprise from all sides. Briefly feeling a sense of deja-vu, Kirk orders the ship into battle before Hikaru Sulu perishes and Uhura reports on the Smallwood's life support failing. Spock takes control of Sulu's console before the warp core breaches, seconds after Uhura realizes that Smallwood in Japanese translates to "Kobayashi". Time suddenly reverses with Q now on the bridge. After Kirk's hand phases right through Q, the being teleports himself and Kirk off the bridge.

Q brings Kirk onto the hull of the saucer section where he explains his nature to the captain. The "test", as Kirk puts it, was an attempt by Q to teach Kirk that no-win scenarios are a reality. Kirk is undaunted and reveals that no matter what, he does not believe in a no-win scenario. Q then takes them both back to 2260 when Kirk died saving the Enterprise. As the two watch, Q asks Kirk if this is constitutes Kirk beating the ultimate no-win scenario before revealing he will show Kirk a scenario where failure is a certainty.

When Kirk returns to the bridge, Pavel Chekov informs him that the Enterprise has been hurled across the Alpha Quadrant. Uhura attempts to sync their chronometer with the nearest time beacon but there aren't any. Ahead looms a large space station with several ships bearing down on the Enterprise.

Captain's log, stardate 2261.34.
The Enterprise has arrived at the previously unexplored star system designated Menzies 216, at the edge of the Alpha Quadrant. It's been several months since we left Earth on our five-year mission. To borrow a phrase from Chief Engineer Scott, the ship and her crew are all firing on all cylinders. All ship systems are operating at peak efficiency. Morale on the ship is good. The better I come to know the crew, the more confident I am they're the best in the fleet.

The situation of Picard's ambassadorship, Data's captaincy (and his existence in what is presumably B-4's body) are all exceptional when compared with the canon continuity of Star Trek: Picard. Licensed works have yet to explain why. 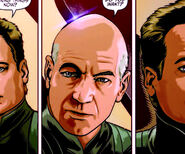 Retrieved from "https://memory-beta.fandom.com/wiki/The_Q_Gambit,_Part_1?oldid=687412"
Community content is available under CC-BY-SA unless otherwise noted.