The Quality of Mercy

For other uses, see The Quality of Mercy.

The Quality of Mercy

The Original Series (Marvel TOS) No. 15

8822.5
That–that can't be… Captain Kirk? Oh, but it is, Doctor! – "The Quality of Mercy" was the 15th issue of Marvel Comics' series of Star Trek: The Original Series comics. It was the seventh of ten comics written by Martin Pasko and the only Star Trek comic drawn by Gil Kane. With this issue, editorial duties transferred from Louise Jones to Al Milgrom.

Captain's log – stardate 8822.5: We are proceeding from Starbase 9 with a minimal crew-complement of 200... all of whom have been granted Class "A" security-clearances for our top-secret – highly dangerous – mission! Chief Medical Officer McCoy and First Officer Spock have been summoned to my quarters for an initial briefing on our destination. However...

Spock, McCoy and a female yeoman are greeted in Kirk's quarters by an orange-skinned being with a horned forehead and a fringe of red hair, who claims to be Kirk. After a moment, Spock and McCoy realize that it is Kirk, wearing a plastiskin facial disguise. Kirk orders the yeoman to have the quartermaster prepare similar disguises for Spock, McCoy and Uhura. Spock recognizes Kirk's clothing as the uniform of a prison guard on Miaplacidus V. The Miaplacidan system is off-limits to the Federation. Kirk briefs his department heads on Phase One of their mission, first having Scotty order activation of an experimental cloaking device installed on Starbase 9. Miaplacidus V is a prison planet run jointly by the planets of the Miaplacidan Alliance, of which only Miaplacidus II still uses the death penalty. That planet runs the execution complex on Miaplacidus V, and Phase One is to place a four-person strike force inside that facility. The Enterprise is about to intercept an automated shuttlecraft carrying four new guards from Miaplacidus II to the execution complex, who will be replaced by the strike force riding in a duplicate of the craft. To prevent the proud Miaplacidans from committing suicide as prisoners, Spock will reprogram the guards with Vulcan telepathic techniques; they will then be sent home aboard their reprogrammed ship.

Captain's log – supplemental: A boarding-party consisting of Mr. Spock, Mr. Sulu and a two-man security team is now preparing to board the Miaplacidan shuttlecraft...

Spock and Sulu succeed in rendering the Miaplacidan guards unconscious with phasers, fists and the Vulcan nerve pinch. Spock begins using the Vulcan mind touch on one of the guards.

Captain's log. – 8853.5: Phase One of our operation has been successfully completed. The automated shuttlecraft is now en route back to Miaplacidus II...

Spock has erased the guards' memories of their original orders, and they are now heading home. Scotty reports that the replica shuttlecraft will be ready at 1600 hours.

Captain's log – supplemental: I have convened a briefing on Phase Two of our mission...

Commodore Markessan, the commanding officer of Starbase 9, is married to an Antosian woman; her species are transmutes who can take any form through molecular metamorphosis. Their 18-year-old son, Tak, was involved in a tragedy on the starbase and fled in a single-occupancy ship, which disappeared. Its destination was the execution complex on Miaplacidus V. A major interplanetary incident might result if the xenophobic Miaplacidans discovered Tak's presence. Kirk, Spock, McCoy and Uhura will pose as the guards to search for Tak, but their cover cannot be broken even if it costs their lives. The Enterprise will follow them and orbit Miaplacidus V, which it can only do for six hours with the cloaking device on. Scotty will beam them up with or without the boy after five and a half hours.

Spock has familiarized himself with Miaplacidan language and customs and shares his knowledge with the other three team members by Vulcan mind-fusion. The four disguised Enterprise officers land at the execution complex and are greeted by Deputy Supervisor Kohll, who takes them to see Supervisor Viermann, who is distracted by watching the execution of Prisoner 472. When Uhura expresses horror, Viermann says that she, like Kohll, is ill-suited to the work done at the complex. Viermann takes the four "new guards" to see a condemned man being prodded into a lava pit by executioners with "tormentor" devices. He receives word that Prisoner 512 has escaped, and Kirk volunteers his group to search for her. They depart in a hoversled, but Viermann is suspicious of them and orders Kohll to follow them.

Kirk's group finds the prisoner some distance from the complex, burned to death by an acidic substance. Spock suddenly runs away from the group. A moment later they are attacked by a Miaplacidan desert-devil, a creature whose salivary glands secrete acid and whose expectorant presumably killed the prisoner. Kirk becomes trapped by rubble. Someone who appears to be the disguised Spock arrives and fires his phaser at the creature, but misses and hits a rock containing magnesium, igniting it. Both McCoy and "Spock" are temporarily blinded, but Kirk, who has lost his facial disguise, shoots the creature. McCoy realizes that "Spock" is an imposter, both because the real Spock's vision would have been protected by the Vulcan inner eyelid and because his phaser must have been set to disrupt or dematerialize to cause the flare, even though Kirk had ordered them to stun the creature. Kirk kicks the phaser out of the imposter's hand and tackles him. He metamorphoses into Tak Markessan, who has inherited his mother's transmute ability. Reassuring the others that Spock is not hurt, Tak explains that he was in love with a girl named Lorina. One night on Starbase 9, Tak drove a ground-transport off the road and into an irrigation canal, and Lorina drowned. An inquest cleared him of responsibility, but Tak reveals that they were returning from a party where he had used cordrazine: "When I ran that transport into the trench... I was stoned!!" Tak makes himself look like air and vanishes.

Kohll arrives and holds the group at gunpoint, recognizing that they are not Miaplacidans. The real Spock comes up behind Kohll and nerve-pinches him. Spock explains that he left to pursue Tak, who was eavesdropping on them and used his powers to lure Spock into a pit. They put Kohll in the pit and head back to the complex in the hoversled, despite Kirk's lost disguise. Back at the complex, "Prisoner 512" has reappeared and is led to an execution platform. Spock explains that Tak has disguised himself as 512 in order to be executed and atone for Lorina's death. Kirk and Spock stun "512"'s guards, but Viermann appears with two more guards and forces Kirk's party to drop their weapons. They fight off the two guards, and as Viermann is about to kill them himself he is shot from behind and killed by Kohll.

Because Kirk's group did not kill him in the wilderness, Kohll extends the same mercy to them. He explains that he was a government worker on Miaplacidus II, assigned to the complex as political revenge, and is disgusted by the savagery practiced there. The real Prisoner 512, who died horribly in the wilderness, was sentenced to death because she was royalty and fell in love with a commoner. Kirk encourages Kohll, who is now Supervisor of the complex, to work for change. Kohll sees wisdom in Kirk's words, but tells him it is the law that, as "outworlders", they must be punished for their presence. However, at that moment Kirk's group and Tak are beamed up to the Enterprise, five and a half hours having elapsed. Tak assumes his true form as the Enterprise departs at warp factor 12.

Captain's log – stardate 8963.3: We have escaped the Miaplacidan system without being detected. Are now on course for Starbase with Tak Markessan as our 'guest'...

McCoy tells Kirk that Tak now feels even more guilty. He helped the prisoner escape to take her place, not expecting her to be killed by the creature. The strong Antosian scruples against committing suicide led Tak to attempt to get himself executed instead. Kirk reflects that they sowed a seed of change in Miaplacidan society and saved Tak's life, at least for the present: "And that's worth something isn't it, Bones? Isn't it?" 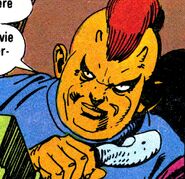 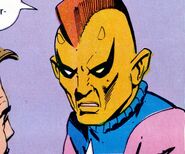 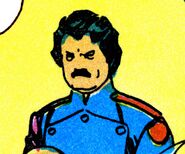 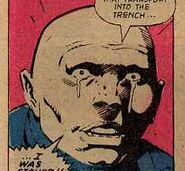 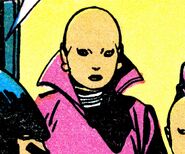 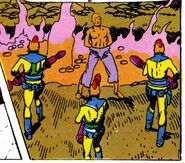 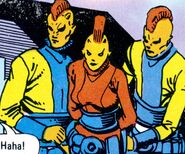