The Enterprise is the only hope battling a Klingon weapon that makes starships mutiny against the Federation.

For some time, Starfleet Command has designated the region of space within the Sagittarius Arm as out of bounds to all United Federation of Planets vessels. The reasons for the isolation of this "quarantine zone" have, until now, remained strictly classified.

Within the past few months, twenty Federation starships have entered the quarantine zone. All twenty have subsequently turned renegade, apparently switching their allegiance to the Klingon Empire. Many of these starships originally entered the zone under Starfleet Command orders to investigate the phenomenon. Each ship, without exception, turned renegade before it could communicate any useful data on the situation. The only relevant information we possess is the last known locations of each of the rebel starships before communications were broken.

The locations of the starships fall within an area centered on the star Dakiak. This region has expanded at an accelerating rate. Our projections now show this "mutiny sphere" enveloping the entire Federation within a matter of months.

With no known means of stemming this rising tide of mutiny within the Federation, Starfleet Command has been forced to isolate the renegade zone completely by enclosing it within a Klein sphere, an interstellar barrier through which no material object can pass. The Klein sphere will be erected as soon as the Enterprise enters the quarantine zone.

Though the Enterprise will remain in subspace communication with Starfleet Command, it will be, effectively, trapped within the renegade zone.

Your mission is to discover the cause of this mutiny (suspicion inevitably falls on the Klingons) and reverse its effects within a five year time period.If the Enterprise succeeds, the thousand stars within the Quarantine Zone will be saved, the Klein Sphere will be dissolved, and the quarantine lifted. If it fails, the Enterprise and its crew are condemned to eternal imprisonment within the renegade zone and Starfleet Command will be forced to make the final adjustments to the Klein sphere and make it a permanent fixture in space.

Remember that, in addition to Federation, Klingon, and independent planets, there are some Romulan-controlled worlds within the Quarantine Zone.

The Romulans themselves maintain a carefully guarded neutrality, but the very existence of the Quarantine Zone has caused a diplomatic incident of galactic proportions for the Federation. Romulan ambassadors to the Federation have lodged strident and continual protests at the Federation's action, and they have demanded the immediate dissolution of the Klein sphere. Thus, the Romulan stance towards the Enterprise and its mission is one of non-cooperation.

Captain's log, stardate 4107.6
In accordance with the directive issued by Starfleet Command seven days ago, the Enterprise has now entered a region of space designated the quarantine zone, and we have now established that this quarantine zone is, in fact, a Klingon construction. The Klingons have discovered that a peculiar isotope of dilithium, dilithium delta 6, found only on Dekian II, acts as a telepathic amplifier. In particular, when linked to a major power source, such as a starship's warp drives, dilithium delta 6 renders most sentient beings within range open to telepathic suggestion from a distance of light-years. Surrender would be useless if employed against a Klingon ship (the Klingons have notoriously little respect for the concept of a "truce" and would obliterate any approaching vessel, white flag or not). The weapon has been devastatingly successful against Federation ships, which observe a policy of neutrality against non-hostile vessels. Even now, isolated from the rest of the universe by the Klein sphere, the commanding Klingon admiral relentlessly pursues his objective. If the experiment succeeds within the quarantine zone, it can just as easily succeed outside the zone once the Klingon Empire finds new sources of dilithium delta 6.

Within the quarantine zone, by accident rather than design, there are also Romulan vessels and Romulan-controlled planets. The Klingon admiral's orders are to avoid confrontation with the Romulans at all times, treating them as respected neutrals. At all costs, he must prevent any form of cooperation between the Romulans and the Federation.

The Klingons fear the Romulan cloaking device, which renders their ships invulnerable not only to normal electromagnetic radiation but to telepathic emissions from dilithium delta 6 as well. If the Romulans were to act in concert with the Federation, it would be disastrous to the Klingon conspiracy.

The crew has been informed of the perilous yet vital nature of this assignment and are prepared to act accordingly. 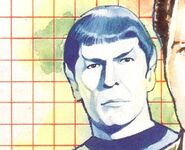 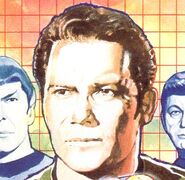 Xuxiaz system.
Add a photo to this gallery

Retrieved from "https://memory-beta.fandom.com/wiki/The_Rebel_Universe?oldid=566271"
Community content is available under CC-BY-SA unless otherwise noted.