The Retirement of Admiral Kirk

The Retirement of Admiral Kirk

The Original Series (US Comic Strips) No. 19

9640.1-9652.6
The Retirement of Admiral Kirk is a Star Trek: The Original Series comic strip by Gerry Conway. It is the 19th story in the US Comic Strips series, published in newspapers over a period of 61 days (nine weeks) by the Los Angeles Times Syndicate. This story depicts events after Captain Kirk's second five-year mission but before TOS movie: The Wrath of Khan. In this story, when Kirk is suddenly grounded, he signs on to command a Free Trader ship.

On stardate 9640.1, the Enterprise returns to drydock and Admiral Yaramoto permanently grounds Admiral Kirk. He doesn't take it well, resigning his commission. He and McCoy order drinks at a bar in the city and talk about Kirk's future. Overhearing them, Morbus, owner of the Free Trader ship Orion, approaches and offers Kirk command of that ship. They look it over. McCoy calls it a junk heap, but as Kirk doesn't have a better offer from Starfleet, he accepts. Kirk says he is doing the only thing he can do. "In that case," McCoy says, "I'm going with you," suggesting he'll also resign his commission.

After Orion launches, Morbus gives Kirk and McCoy a tour. The cargo hold, he says, is full of farm equipment bound for Epsilon-21. Suspicious, McCoy sneaks in and opens one of the containers, then is knocked unconscious from behind by Lugo, who is guarding the cargo. Lugo brings Kirk to the cargo bay, showing him the injured McCoy, who "hit his head on a pipe." Concerned he might have a skull fracture, Kirk takes McCoy to the ship's sickbay. McCoy will recover, but the ship's doctor says McCoy will be sedated until they arrive at Epsilon-21.

Onboard the Enterprise, Scott is stunned that Kirk has become a free trader, and feels that Spock's stoic acceptance makes him seem heartless. Spock checks into Orion. Starfleet reports "irregularities" with its registration.

Meanwhile, aboard Orion, Kirk spot-inspects the engine room as a distraction to set a timed engine overload. Then he creeps into the cargo hold and kayos Lugo. As he opens a container to reveal a cargo of humanoids, Morbus appears from the shadows with three officers, ready to kill Kirk. Morbus used Kirk's reputation as an admiral to get the ship cleared, but now that their slave trading has been exposed, Kirk will be killed. Kirk says he rigged the engines to blow in one hour if the correct abort code isn't sent, but Morbus counters by having Lugo drag McCoy into the room, and pointing out that if Morbus dies, so will Kirk, McCoy and the slaves.

Outwitted, Kirk and McCoy are sealed into one of the slave containers. Morbus keeps the two alive in case they are needed before they get to Epsilon-21. Their helmsman reports the Enterprise approaching.

Captain's log, USS Enterprise, stardate 9652.3.
Spock reporting, in command. I have fired a warning shot across the bow of the free-trader Orion and have ordered them to heave to or risk annihilation.

The slaves reveal themselves to Kirk and McCoy as something else entirely. The leader of the Maroni reveals they are both empathic and telepathic, and for the past century the ancient race has passed themselves off as slaves while they observe and learn about other races. Ready to act, all of the Maroni join into one telepathic, unified mind and reach into the hearts of Orion's crew, showing them how to feel compassion for others.

On the bridge, Morbus orders Kirk to call off the Enterprise. Kirk sticks to his guns, saying the Enterprise crew know their duty, and will fire if Morbus does not heave to. Panicked, Morbus reaches out to his crew, but they've had a change of heart and have changed sides. Just in case, Kirk calls Spock, reporting everything is under control. The Maroni leader tells Kirk he needn't have bothered, since they have been in telepathic contact with Spock since before Orion had launched.

Captain's log, USS Enterprise, stardate 9652.6.
Admiral Kirk providing supervisory supplemental. Starfleet Command has confirmed my return to active duty status, though Spock retains command of the Enterprise. They have... congratulated us for our handling of the Orion affair... but frankly, I'm still personally confused by the outcome.

Back aboard the Enterprise, Kirk is confused that Spock hadn't taken any action to stop the slave trade on Orion, but Spock replies that the Maroni had telepathically told him that Kirk had everything under control. Kirk seems satisfied the affair is over, but McCoy wonders if Kirk has forgotten that his future eventually involves a ground assignment, or if Kirk just doesn't want to remember. 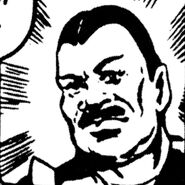 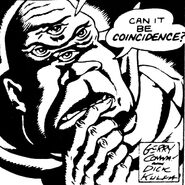 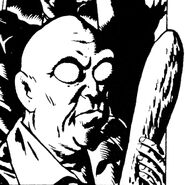 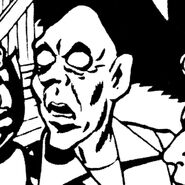 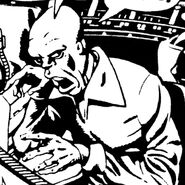 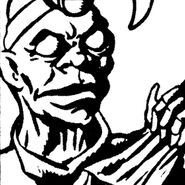 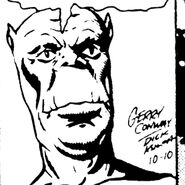 Leader of the Maroni