The Return of the Archons

The Return of the Archons

"The Return of the Archons" was the 22nd episode of Star Trek: The Original Series, in the show's first season, first aired on 9 February 1967. The episode was written by Gene Roddenberry and Boris Sobelman, directed by Joseph Pevney and novelized in Star Trek 9 by James Blish.

In a rare case of a TOS television episode receiving a comic adaptation, the Brazilian comic "A Hora Rubra" ("The Red Hour") was published. The story's English language translation was eventually released in the Eaglemoss Collections Graphic Novel Collection.

DVD teaser
When a landing party on Beta III exhibits strange behavior, Kirk and the crew discover a society whose individuals appear to be staid and respectable, until the advent of "Red Hour"...

The USS Enterprise enters the C-111 system after receiving a 100-year-old distress call from the USS Archon. After entering orbit of planet Beta III, Captain Kirk sends a landing party down to the planet to investigate.

While Kirk and the landing party are investigating, the Enterprise is slowly being pulled out of orbit of Beta III to be absorbed by "The Body", which is what happened to the Archon a century earlier.

On the surface, Kirk discovers that the survivors from the Archon formed an underground group to resist "The Body", and Kirk manages to contact their descendants, and arranges their help to destroy Landru. Upon finding Landru, they discover that Landru is a highly sophisticated computer that was built 6,000 years earlier. The original Landru, a respected philosopher, only wanted to guide his people to become peaceful and civilized. While Landru had programmed the computer with his intellect, it didn't have his wisdom, and over the centuries the computer interpreted Landru's instructions literally and didn't allow anyone to show independent thought.

Kirk persuades the computer that it has destroyed Betan society and that it had failed in its objective, prompting the computer to destroy itself. The people of Beta III are now free, and Kirk arranges for Federation assistance in putting the planet back together again.

Captain's Log, stardate 3156.2.
While orbiting planet Beta III trying to find some trace of the starship Archon that disappeared here a hundred years ago, a search party consisting of two Enterprise officers were sent to the planet below. Mister Sulu has returned, but in a highly agitated mental state. His condition requires I beam down with an additional search detail.

Captain's log, stardate 3157.4.
The Enterprise, still under attack by some sort of heat rays from the surface of Beta III, is now being commanded by engineering officer Scott. The shore party has been taken by the creature called Landru.

Captain's log, stardate 3158.7.
The Enterprise is preparing to leave Beta III in star system C-111. Sociologist Lindstrom is remaining behind with a party of experts who will help restore the planet's culture to a human form.

Captain's log, stardate 21:07.6 –
The Enterprise is in orbit around the fourth planet of the Omega One Galaxy! Lieutenant Sulu and Private O'Neal are on the surface for routine investigations...

As Sulu calls in, the ship is suddenly bombarded with energy, impelling a crash within 26 hours. Sulu starts talking strangely, so Kirk orders the landing party to be beamed back. Leonard McCoy treats Sulu in sickbay, but O'Neal is missing. Kirk and Spock beam down to locate O'Neal, materializing outdoors in a city shortly before the Red Hour ends, with everyone fighting.

The clock chimes and peace resumes. Two hooded overseers notice that Kirk didn't fight and demand that he join Landru. Kirk asks what will happen if he refuses. One of them points a hollow tube, shooting a telepathic blast that hypnotizes Kirk. Montgomery Scott alerts Spock that the ship has only three hours left. Spock quickly shoots the overseers, who burst apart into robot debris. Kirk's mind clears, but Spock senses a telepathic command for The Body to attack them. A mob carrying clubs approaches, and Kirk spots O'Neal among them. Kirk and Spock stun the mob with phasers.

Behind them, an image projection of Landru appears, ordering Kirk and Spock to be destroyed for the good of the body. Kirk states that Landru rules without a soul. Landru answers that he doesn't know what a soul is, and emits energy that makes Kirk's head ache. Kirk shoots at the projection, blasting a hole through the building's exterior, revealing a large machine within. Spock contacts the Enterprise, learning from computer records that Landru was a tyrant everyone believed was dead. Kirk thinks Landru built a machine to continue his tyranny. Kirk tells it that ruling without a soul is evil, and the computer sputters before self destructing. 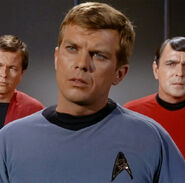 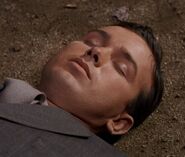 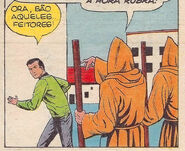 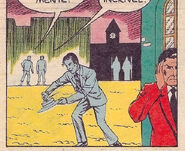 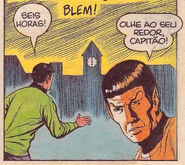 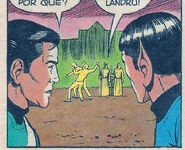 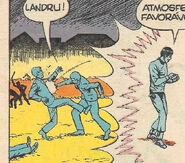