The Return of the Archons, Part 1

The Original Series (IDW ongoing) No. 9

The Return of the Archons No. 1

2258.241
"The Return of the Archons, Part 1" was the ninth issue of IDW Publishing's ongoing series of Star Trek comics. The issue consisted of a first part of a loose Kelvin timeline adaptation of TOS episode: "The Return of the Archons", as adapted from the original by writer Mike Johnson. Issue art was by Stephen Molnar, with colors and lettering by John Rauch and Neil Uyetake, respectively. This series premiere was edited by Scott Dunbier, with Robert Orci credited as creative consultant.

At Starfleet Academy, the Starfleet Chiefs of Staff get Hikaru Sulu to consider transferring to an elite unit within Starfleet. They do not expect an answer at this moment. Sulu remains on his new assignment to the Enterprise for the time being.

An old mystery draws us to the remote planet Beta III. Rumor has it that an early Starfleet ship called the Archon vanished on an exploratory mission to the planet a century ago. Strangely, there's no mention of the Archon in Federation archives. It's as if the starship never existed. Beta III is listed as a barren rock. The only reason I know about it at all is thanks to an old academy professor who told me wild stories over a few bottles of Orion Whiskey at a dive off the Embarcadero. All I remember is the name of the ship, and the place. "Beta III", he kept saying. "Stay away from Beta III. Archon should have." Since our course has brought us right past Beta III, I'm taking the bait. We've discovered a small settlement on the surface. Stranger still, the population appears human. I've sent down a two-man recon team consisting of Lieutenants Sulu and O'Neill to investigate, disguised in our best approximation of local clothing based on our orbital scans.

Eighteen months later, the Enterprise is on its way back to Earth after what happened on Romulus and stops by Beta III. Sulu and O'Neill end up on the run from lawgivers. O'Neill is captured. Contact is lost with Sulu. Kirk and Spock decide to go down to the surface via transporter. Dr. McCoy and Lt. Lindstrom accompany them. McCoy is not happy. The landing party notices that the people are acting unusual. Surprisingly, they know Federation Standard. They believe in a figure called Landru. The landing party get into a fight with some lawgivers who give chase while Lindstrom is absorbed into the body of Landru's followers. Unable to use his combadge, he uses a handheld communicator to contact the Enterprise which is having problems of its own. Lawgivers give chase but Sulu saves the day.

The landing party arrives at where the USS Archon is buried to find that O'Neill has been absorbed as well. The lawgivers are knocked out while the party goes to the USS Archon. Kirk realizes that Landru is a computer. In the Archon, they discover a mysterious sphere which turns out to belong to Starfleet. Kirk and Spock realize that Starfleet is involved in a cover-up just as angry citizens attack. 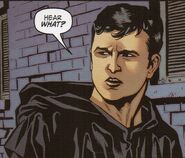