Captain Mackenzie Calhoun and the crew of the USS Excalibur are back, picking up three months after the stunning events depicted in New Frontier: Blind Man's Bluff. Calhoun's search of Xenex has failed to find any survivors, and now he is bound and determined to track down the race that killed them—the D'myurj and their associates, the Brethren—and exact vengeance upon them. His search will take the Excalibur crew into a pocket universe, where he discovers not only the homeworld of the D'myurj, but another race that shares Calhoun's determination to obliterate his opponents. But is this new race truly an ally… or an even greater threat?

In the year 2380, the crew of the Federation starship USS Excalibur-A makes first contact with the Dayans, a race that lives in the pocket universe that can be accessed from Thallonian space. Dayans had six arms, a deep blue skin tone and possessed a keen sense of smell and great physical strength. The Dayans had been exterminating other races for centuries and were at war with the D'myurj and the Brethren. The Dayans were nomadic by nature and had no home planet. The entire Dayan race lived on a single ship, and they had no interest in conquest or expansion.

After convincing the crew of the Excalibur to neutralize the planetary defenses of the D'myurj homeworld, they exterminate the population of the planet and quickly turn on their newfound allies and attempt to gain entrance to the primary universe. Extremely nihilistic and violent, they believed that intelligent life was a plague in the universe, and devoted all their resources in the destruction and genocide of every civilization and race they encountered. Their starship had a symbiotic relationship with its crew, and thanks to its bio-technological nature was able to regenerate any damage done to its frame in seconds, making it virtually indestructible.

Although they manage to gain entrance to the primary universe, the wormhole that links it to their pocket universe was destroyed by Soleta, who detonated her starship inside of it.

Shortly after, they try to destroy New Thallon and the Excalibur, but they were stopped by Cwansi, who teleported away their starship and left the entire race unprotected in the void of space. Mackenzie Calhoun took the decision to leave them to die since he considered them to be a terrible threat to the Federation and the galaxy, rendering them extinct.

In keeping with the aesthetic of the last decade or so of New Frontier stories, the cover art displays a panoramic vista of an alien city. This probably depicts either New Thallon or the D'myurj homeworld. Since New Thallon had only been recently settled, it is likely the intricacy of the city construction shown belongs to the D'myurj. 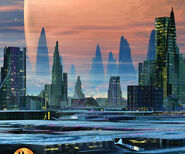