The Original Series No. 78

When an entire solar system begins to disintegrate into cosmic rubble, Captain Kirk suspects that rumors of a new Klingon superweapon are all too true. The Tautee system houses a flourishing pre-warp civilization not quite ready to join the Federation, so the Prime Directive limits Kirk's ability to undo the disaster, and his humanitarian rescue operations provoke a hostile response from four Klingon warships.

What is destroying the Tautee system? The USS Enterprise must uncover the truth before the catastrophe extends beyond Tautee to threaten the very nature of reality itself.

In the year 2268, the Kanst Energy Center worked to harness the energy produced by fusion in the outer planets of the system – and to deliver that energy via microwave transmission deeper into the inhabited planets. However, overseen by two Tauteean scientists, Prescott and Folle, the project resulted in the horrific disintegration of all fifteen planets of the Tautee system.

As the debris of the system settles into "rings" around the sun mirroring the orbits of the former planets, only a few thousand survivors remain alive in outposts, bunkers and pre-warp space vessels – including, Prescott and Folle. While Prescott burdens herself with the belief that she caused the destruction of her entire race, Folle and other surviving scientists attempt to send a signal to other survivors in hopes of rescue. Meanwhile, when a series of subspace waves begins emanating from the pre-warp Tautee system, the USS Enterprise is dispatched to investigate.

Captain's log, stardate 3871.6
The Enterprise has been ordered to the Tautee system to investigate waves of subspace interference coming from the area. Long-range scans have shown that some, if not all, of the planets of the Tautee system have broken apart. Admiral Hoffman believes that the Klingons might be involved in the system's destruction, although she doesn't rule out other causes. The Tautee system fails under the area covered by the Organian Peace Treaty, and the Klingons are looking for almost any reason to move into the disputed area. We have also heard rumors of the Klingons developing a new superweapon. My personal hope is that these rumors are false. We have one other concern. A team surveyed the Tautee system ten years ago, and found a spacetraveling pre-warp culture insufficiently developed to have contact with the Federation. We are to arrive as quickly as we can, not just to stop any problems with the Klingons but also to see if the Tautee peoples were able to save themselves. Admiral Hoffman reminded me that the Prime Directive is in effect in all matters regarding the Tauteean people. The U.s.s. Farragut, captained by Kelly Bogle, has been ordered to the Tautee system to give us backup if needed. Since I served with Kelly Bogle on the Farragut, this should prove to be an interesting reunion.

When the Enterprise arrives, James T. Kirk wonders if the terrifying destruction wrought on the system might be the result of a new, rumored Klingon super-weapon. However, shortly after Spock detects the survivors' distress signal, the Enterprise detects four Klingon warships on the periphery of the system. After a skirmish in which the Klingon commander KerDaq insinuates that the destruction is the result of a Federation super-weapon, Kirk decides to make an attempt to rescue the survivors, despite the Prime Directive and the pre-warp status of the aliens. But the USS Farragut, which arrived to support the Enterprise's investigations, and the Klingon vessels which survived the initial skirmish remain on the edge of the system watching warily in impasse.

Just as Prescott wonders if Folle's miraculous disappearance is the result of death, she is whisked away with the others to the Enterprise's transporter room. Amidst the survivors, Prescott identifies herself as the leader to Leonard McCoy and the doctor accompanies her to the bridge where she can provide the Captain with some explanation of what happened. After Spock helps assuage Prescott's guilt by explaining that, rather than her fusion-generation method, it was the microwave transmission method that resulted in the system's destruction, the Farragut and Enterprise venture further into the treacherous subspace waves to rescue more survivors.

As the Farragut and Enterprise science officers investigate the subspace tear at the edge of the Tautee system, Kirk and the Farragut captain Kelly Bogle debate the particulars of the Prime Directive as more and more survivors are discovered. The ramifications of saving a few dozen survivors do not compare to saving thousands of pre-warp aliens, according to Bogle's logic. However, when it is discovered that the subspace tear will continue to expand – killing all Tauteean survivors – and encroaching upon nearby Federation systems, Kirk, Bogle, and KerDaq agree to cooperate in sealing it. Yet one final detail gives them pause when Spock explains that the aftershocks will destroy the fragile debris cradling the Tauteean survivors. Kirk reasons to Bogle that since the actions of the Starfleet officers to seal the tear will result in Tauteean deaths, the Prime Directive does not apply and that they must rescue all of the survivors before sealing the rift. Although Bogle questions the strength of Kirk's logic, he agrees.

In the climactic final moments, the Klingon vessels under KerDaq, the Farragut and Enterprise cooperate in sealing the rift – after a final last-ditch effort to save another thousand Tauteeans – but when the Klingons and Farragut warp away to avoid the calamitous aftershocks, they discover the Enterprise has not followed. The subspace turbulence having damaged critical systems, Kirk pushes Scotty's skills to the test – and they manage to survive the shockwave.

Ultimately, the Tauteeans are offered the chance to settle another world in the Federation; and the Enterprise and Farragut crews enjoy much-deserved R & R, enjoying some simulated golf with Scotty's foray into early holodeck technology. 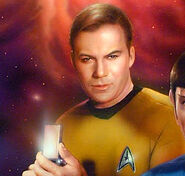 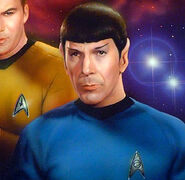