unknown
"The Saboteur Within" was a 14-page Star Trek: The Original Series comic strip. It was the 33rd weekly story arc in the UK comic strips series, published in seven installments in Valiant and TV21 in 1972. In this story, a disembodied saboteur threatens to destroy the USS Enterprise.

Teaser, November 4, 1972
Passing within tactical range of the Klingon-held planet, Cereon, the starship Enterprise was safe within its force-shield. But an intruder was beamed aboard — the spirit of a Cereonian slave, that quickly destroyed Crewman Connors and took control of his body…

Using a body detachment tank, the disembodied will of a Cereonian is sent to the Enterprise, where it kills and possesses Connors. Although he tries to blend in, the intruder responds irrationally and then attacks his coworkers. "Connors" nearly strangles James T. Kirk before Leonard McCoy can knock him out with a hypo. To avoid an examination, the Cereonian abandons Connors' body and seeks another. But that creates a mystery, as scans show Connors has been dead for more than an hour. Spock deduces what was happening based on the medical data, their proximity to Cereon, and the Cereon potential for thought projection.

The crew are ordered to work in pairs to limit the intruder's threat. In response, Klingons divert a D7-class battle cruiser to shoot at the Enterprise. A weapon's blast knocks out McCoy, leaving medic Peterson alone and vulnerable to the Cereonian. A lucky shot by the Enterprise destroys the cruiser, but by then "Peterson" has locked himself in the engine core and begins to disable overload safeguards. Shuttlecraft are readied in case the crew needs to abandon ship.

Kirk attempts to drill through the door to main engineering. Meanwhile, Spock borrows a thought projector device McCoy uses to calm disturbed patients. Once Kirk punctures the door, Spock uses the device to disrupt the saboteur's concentration and scramble contact with his masters. Realizing their agent might be compromised, Klingons ready three more Cereonians. But Spock suspects that, with his thoughts scrambled, the saboteur might be susceptible to mental coercion. Spock telepathically suggests that the Cereonian abandon Peterson's body, return to Cereon and destroy the Klingons' equipment. The Cereonian obeys, triggering a large explosion on the planet and ending the crisis. 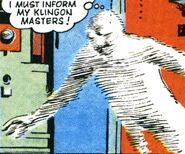 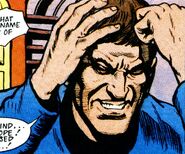