The Original Series (US Comic Strips) No. 9

7692.7
"The Savage Within" is a Star Trek: The Original Series comic strip. It is the ninth story in the US Comic Strips series, published daily in newspapers over a period of 12 weeks by the Los Angeles Times Syndicate in 1981. The story was set during Captain Kirk's second five-year mission aboard the refit USS Enterprise. In this story, the crew has 37 hours to rescue the inhabitants of a massive derelict from a nearby neutron star.

Omnibus teaser
Kirk must save a derelict generational ship from deadly neutron star radiation and stop a 300-year clan war.

We are on a mission to chart Epsilon Anubis, a double star system in the unexplored region of the galaxy, and to make contact with any intelligent life there.

Captain's Log: Stardate 7692.7.
During a mission to chart Epsilon Anubis, a double-star system in the unexplored region of the galaxy, our sensors have located a derelict vessel in orbit around the system's principal star. We are going in to investigate.

Spock determined the derelict has a malfunctioning laser fusion drive, sublight propulsion. Unfortunately, Epsilon Anubis B was a neutron star, and its orbital path would pass near enough to the derelict in 37 hours that X-ray and gamma radiation would kill any inhabitants. Scotty says it would take two months to tow the massive derelict away from the star. The only way to rescue the inhabitants would be to repair the ship's engines. They also discover a second vessel attached underneath the derelict. Scott takes command. Kirk beama over to the derelict with Spock, McCoy, Security Sergeant Umeki, young Engineering Ensign Thomas Hadley, and Hadley's assistant engineering droid.

300 years worth of dust coats the equipment in the derelict. Hadley puts on his helmet and scouts ahead, wary of radiation leaks. McCoy finds a pile of bones, some of which weren't humanoid. Suddenly they are overrun by barbarians wearing old equipment and carrying makeshift spears. Umeki falls, but Kirk, Spock and McCoy are brought before leader Korm Nal and second in command Cha Ton. Korm Nal, clad in an Egyptian-like gold necklace and tiara, asks the newcomers what clan they came from. She was taken aback when Kirk identifies himself as captain of a starship.

Meanwhile, Hadley and his droid locate "the junction of the fusion combustion chambers," and needed to locate the one with a hole in it. Scotty advises checking seals around each hatch carefully. With the droid providing tools, Hadley inspects the hatches, eventually entering the one most likely to be repairable, but finding high resistance in the main power feed. Scotty can hear from Hadley's tone that the young engineer feels the burden of this mission on him.

As they take the landing party to their stronghold, Korm Nal orders one of her people to remove some gear from a wall. It explodes. Kirk dives to save Korm Nal, absorbing some of the blast impact himself. As McCoy tends to Kirk, Cha Ton reaches to stab McCoy, but Korm Nal orders him to halt. Then, several very large insectoid aliens approach, called the Eloksi. Spock and others collapse in pain from a strong burst of mental energy, and many are covered with a glue-like secretion before the Eloksi grab McCoy and retreat.

Captain's Log: Stardate 7693.5.
Members of my crew and I are aboard a derelict vessel in close solar orbit around Epsilon Anubis A... 12 hours remain until that star's binary companion, a deadly radioactive neutron star, begins its encounter phase... 12 hours to save the inhabitants of this ship — and ourselves — from a certain and terrible death! We are no longer prisoners of the Shi'e Clan, barbaric descendants of the original crew of this vessel... led by the beautiful and enigmatic Korm Nal... and we have survived an attack by a race of telepathic aliens, the Eloksi, who may have come aboard from the mysterious starship docked to this vessel... but the fate of Dr. McCoy is unknown! We must find him...

Spock is certain the Eloksi came from the small vessel attached to the derelict. From stories told by Korm Nal, several clansmen died during previous approaches to the neutron star, and the Eloksi have been aboard for several clan generations. The person in charge of all the clans was hereditary Captain N'ga, but Korm Nal said all who seek him have died, but would help Kirk find him.

In the meantime, Hadley and Umeki had been captured and brought to N'ga on the bridge of the derelict. Seeing one wounded, and feeling certain there'd be more with them, N'ga hails the Enterprise using "the ancient ritual of summons," but when there is no response, N'ga fires lasers at the Enterprise. Sulu reports their number one shield was weakening against the repeated laser barrage, but Scott wouldn't retreat out of transporter range. Back in contact with the landing party, Scott updates Kirk. Having no other options, Kirk with Korm Nal's clan storm the bridge of the derelict just the Eloksi appear, carrying McCoy.

Kirk asks Korm Nal not to attack the Eloksi. Spock reaches out with the Vulcan mind touch. Realizing they were McCoy's friends, the Eloksi hand McCoy to Kirk. McCoy explains that the Eloksi came centuries ago to rescue survivors on the derelict, but Eloksi telepathy was so strong that it inadvertently killed people and started a war, and they've been unable to get back to their own ship ever since. McCoy beams back to the ship with Hadley and Umeki. Deciding there's been enough talk, Korm Tal declares herself the new captain of the derelict.

Kirk reasons with Korm Nal, explaining in her terms that they have one hour to restart the derelict's engines or all would die.

Captain's Log: Stardate 7694.3.
The derelict's remaining engine has failed to fire. Our only hope is that this was due to an improper firing procedure, and not mechanical failure... Everything depends on how much accurate technical information has been passed on, in ritual form, to N'ga, the hereditary captain of this vessel...
Captain's Log: Stardate 7694.3.
There has to be a vital clue to the proper firing procedure for the ship's drive in the ritualized actions of N'ga, hereditary captain...

Spock goes with the Eloksi to their ship. With the Eloksi ship and the Enterprise towing with tractor beams, and N'ga performing the ritual that results in the right buttons being touched to restart one engine, the derelict is moved out of danger. 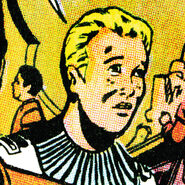 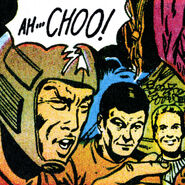 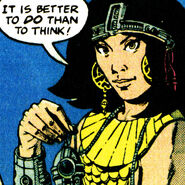 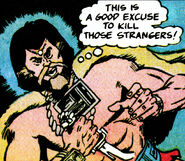 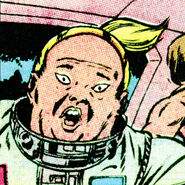 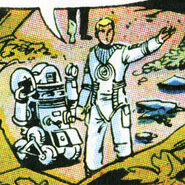 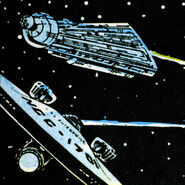 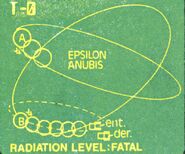