8475.2
After escaping the infuriated Salla who pronounces Kirk's death sentence, the Enterprise-A picks up Ambassador Palmer to mediate a dispute between the Buice and Ziminda on Chronian III. Meanwhile Klaa and Vixis vow to hunt Kirk down.

The members of the Federation Council erupt with outrage over the announcement by the Klingon ambassador Kamarag offering riches beyond compare to anyone who brings the Klingon Empire the head of Captain Kirk.

Meanwhile Captain Kirk is starring down the Salla of the Nasgul who had used a spoken command to kill the Nasgulian, Argus that was standing on the USS Enterprise-A bridge. Salla pronounces a sentence of death on Kirk.

At Starbase 42 Ambassador Palmer is furious over the delay of the Enterprise for the scheduled briefing. Palmer declares that any deaths on Chronian III caused by the delay will be blamed on Captain Kirk.

Kirk continues his streak of annoying people by not falling over dead at the Salla's command. The Salla's ship fires its weapons at the Enterprise as they warp off for Starbase 42. After Kirk's log recorder fails to take a log entry Kirk heads down to sickbay to find out if Doctor McCoy's autopsy has revealed anything about the death of Argus. Despite all of Kirk's suggestions, nothing could be found that explained the death. Just before arriving at the starbase, Ensign Fouton attempts to apologize for letting Argus die. Kirk confirms with him that the young security guard could not have prevented the death.

An irritated Ambassador Palmer begins the briefing of the next mission for the Enterprise. They were instructed to transport the ambassador to Chronian III at the request of Takula, the leader of the Ziminda. Takula wishes to have the Federation mediate a peace treaty with the Buice. However before leaving an incoming transmission arrives from the president Hiram Roth. He called to inform Captain Kirk about the Klingon bounty of ten-million credits.

In the weapons bay of the IKS Okrona, Kron attacks Captain Klaa with a garotte believing him ripe for assassination. After Klaa overpowers him, he stuffs Kron in a photon torpedo and launches him off the ship. Upon returning to the bridge, Vixis informs Klaa of the bounty on Kirk's head. Klaa, wanting revenge and wanting to avoid embarrassment for the Klingon race, orders his ship to intercept the Enterprise.

Just before arriving at Chronian III, Pavel Chekov leaves the bridge in order to finalize security arrangements. His replacement is Lieutenant junior grade Kathy Li who meets Commander Hikaru Sulu for the first time. Despite her comment on how she thought he would be taller, the two of them hit it off.

"Testing. Testing. Captain's Log, Stardate 8475.2. We are presently in orbit around Chronian III, and are preparing to beam down with Ambassador Palmer to meet with planetary heads."

Kirk, Spock, Chekov and Palmer beam down to a desolate world and are greeted by Takula, who takes the away team to meet with Kime, the Buice leader. Kime informs them that Takula is only delaying his defeat and that the Buice have no intention of participating in any talks. Kime then draws a weapon and demands that the Federation men leave. 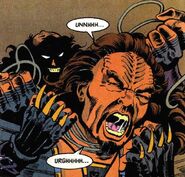 Klaa attacked with a garotte. 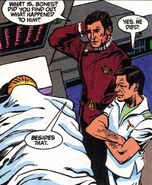 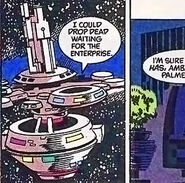 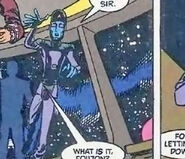