The Enterprise, under the command of Captain James T. Kirk, is on an 8-day supply mission to Colony Beta VI located in Quadrant 904. Along the journey, the ship encounters a rogue planet drifting through space. Without the time to really stop and investigate it, Kirk orders the planet to be recorded for a future exploration mission and to continue with their original heading. Suddenly, Kirk and Lt. Sulu are teleported from the bridge.

Spock believes that the two must have been taken to the mysterious planet below even though sensor readings indicate the planet's atmosphere is lethal to most forms of life. The Enterprise then receives a strange message on a viewscreen, in blackletter writing, "Greetings and Felicitations!" followed by "Hip hip hoorah. Tallyho!" Spock orders Dr. McCoy, along with Lt. DeSalle and geophysicist Karl Jaeger, to form a landing party and conduct a search.

The landing party beams down and finds the area to be a lush and breathable environment, contradicting Jager's original scans that the world was barren and couldn't support life. They also come to what appears to be a medieval castle constructed in the middle of nowhere. They soon find Captain Kirk and Lt. Sulu, along with a brash and impetuous being who identifies himself as "General Trelane". McCoy's medical tricorder does not get any readings from Trelane and, according to the scanner, nothing is there. Trelane invites everyone to stay as his guests on his world he calls Gothos and discuss his favorite subject: the military history of eighteenth-century Earth.

Spock, meanwhile, manages to locate the landing party and beams everyone, except Trelane, back to the ship by locking onto every detectable lifeform in the area. Unwilling to let his guests leave, Trelane makes an appearance on the Enterprise's bridge. He then brings the entire bridge crew back down to the planet. This time he includes Spock, Uhura, and Yeoman Teresa Ross.

Kirk's patience with Trelane begins to wear thin and, while Trelane dances with Yeoman Ross, (after changing her uniform into a flowing formal ball gown) Kirk and Spock notice that their host never strays far from a particular wall mirror. They surmise that the mirror may be the source of his powers. To test this theory, Kirk provokes Trelane into a duel and, during the fight, destroys the mirror, damaging the strange machinery inside. It is discovered that Trelane uses these machines to manipulate matter for his amusement. The bridge crew manages to beam back to the Enterprise, but, as the ship warps away, Gothos keeps appearing in its path. The Enterprise stops and Kirk beams back to Gothos to confront Trelane. Trelane tells Kirk he must face a trial for "treason". Trelane condemns Kirk to death by hanging, but Kirk, playing off of Trelane's childish whims, has a better idea.

In order to have his ship released, Kirk offers himself as the prey for a royal hunt. Trelane gleefully accepts and the hunt begins. Just as Trelane is about to kill Kirk, two energy beings appear and put a stop to his fun. It is revealed that Trelane is the "child" of the two beings. After apologizing to Kirk for their child's misbehavior, the beings disappear along with the whining Trelane, and Kirk is allowed to return to the ship.

Collector's edition VHS release with "Patterns of Force".
Add a photo to this gallery 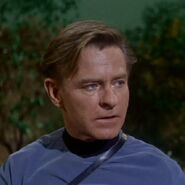 Beta VI.
Add a photo to this gallery

Retrieved from "https://memory-beta.fandom.com/wiki/The_Squire_of_Gothos?oldid=664458"
Community content is available under CC-BY-SA unless otherwise noted.