2269
The Starless World is a Star Trek: The Original Series novel, among the thirteen that were published in the 1970s by Bantam Books. Written by Gordon Eklund, its first printing was in November 1978.

Inside the hollow shell of a strange, remote planet Kirk and the Enterprise crew discover a planet within a planet… energized by a white dwarf star… a planet like a lost Eden populated by a race of small, gentle, furred bipeds… a planet falling toward a black hole to spectacular peril and inescapable doom…

While exploring a region of space, the starship USS Enterprise discovers a man claiming to be Jesus Christ in a shuttlecraft from a starship that went missing twenty years prior. The insane fellow in the USS Rickover shuttle turns out to be James T. Kirk's former roommate, Thomas Clayton, whom he had expelled from Starfleet Academy for cheating. Cheating would not be tolerated by Kirk, especially not at the Academy. Thomas Clayton rants and raves about Ay-nab and attacks several people after overpowering the witless med tech placed in charge of his captivity. This causes the USS Enterprise to backtrack the shuttle's course. The USS Enterprise is then captured by an unseen force and held within a Dyson sphere called Lyra.

James T. Kirk and company descend to the planet where he becomes romanticaly invovled with a local inhabitant. The local girl is furry and believes she is married to Kirk. Kirk soon discovers Klingons are also trapped within this construct, and that all weapons but a special sort found on the surface are useless. The Klingons claim to be political dissidents on the run from the emperor and ask for Kirk's help in escaping Lyra. The landing party camps out within the village on the surface, and in the night Strangers attack, causing commotion. Startled by noises outside her hut, a nude Uhura ventures into the night. This is not very unusual, as Uhura mentions that within the United Federation of Planets the only reason anyone wears clothes at all is to help maintain order onboard starships.

Nyota Uhura discovers her father and the two run off to join the other Strangers. Clayton again outwits the med tech in charge of his confinement and again attacks crew members, this time taking hostages. Kirk and Spock commune with Ay-nab and learn the history of Lyra. A species seeking to end the cycle of war and rebuilding turn to the god Ay-nab that lives within their star. Ay-nab offers to teach them to build a Dyson's Sphere, but promises that they will all be destroyed in a black hole if they do this. The locals accepted this offer, built the sphere, and now have dwindled down to the village's small population as Lyra fast approaches the black hole. Kirk is allowed to leave with Uhura, but must leave all the others behind, as Ay-nab drains them of their life force in order to survive. Kirk bargains for the life of his 'wife', Ola. As the Enterprise escapes, Spock ponders the destruction of Lyra suggesting they might instead have used the black hole to travel to some other universe or location. The Klingon ship is also allowed to leave, but without their newfound arsenal.

2 to 4 billion years ago
Ay-nab begins its doomed journey on board the Lyra Dyson sphere. (Referenced)

2250
Cadets James T. Kirk and Thomas Clayton are roommates at Starfleet Academy. James T. Kirk later turned his roommate in for cheating. When asked why he did it, Kirk responded that he couldn't stand a cheater, especially at the Academy. (Referenced in Chapter 1)

Before 2257
Alhamisi Uhura took a young Nyota Uhura out of her home in Dakar to visit his rural family. (Referenced)

2260
Alhamisi Uhura goes missing. Alhamisi was a Starman who wandered the galaxy alone in an era of Human space exploration before the creation of the Starfleet. (Referenced)

Stardate 6527.5
The USS Enterprise locates an insane Human, Thomas Clayton, in uncharted space traveling in a shuttlecraft from the USS Rickover. (Chapter 1)

Stardate 6528.4
The USS Enterprise discovers and becomes trapped within the Lyra Dyson sphere by Ay-nab.

Stardate 6533.9
The USS Enterprise attempts to discover the nature of Ay-nab as Nyota Uhura recalls a childhood with an often absent father. Alhamisi Uhura and many others are discovered living beneath the surface of Lyra.

Stardate 6537.7
The USS Enterprise escapes before Lyra is engulfed by a black hole. (Final chapter) 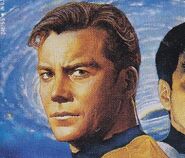 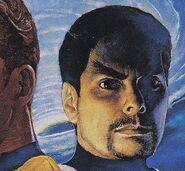 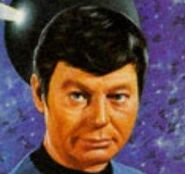