2372
"The Storm" was the first issue of Marvel Comics' 1996 series of Star Trek: Voyager comics and the first ever to feature to adventures of the Voyager crew. The issue consisted of a 22 page story written by Laurie S. Sutton. The art was pencilled and inked by Jesus Redondo, with Bobbie Chase credited as editor.

Captain Janeway orders Lieutenant Paris to set course for an incoming distress signal coming from a Talaxian ship caught in an ion storm inside an asteroid field. Ensign Kim manages to get an image on the viewscreen despite the interferences from the storm. Commander Chakotay estimates that the ship will last no longer then ten minutes in their current position.

Janeway thinks back that only a few hours ago she was on the holodeck with Molly as she complimented Neelix and Paris for the Earth park program. She saw Kes talking with The Doctor while he fished, Lieutenant Torres, Commander Tuvok and Paris played a baseball game against the stellar cartography department. But those thoughts leave her quickly as she focuses on the situation at hand.

As Voyager enters the storm, Janeway orders for a tractor beam lock on the crippled ship. Kim tells her that there is no way to maintain the beam's cohesion with the level of ion interference. Janeway communicates with Torres down in engineering, who tells Janeway that she might be able to re-establish the beam but she will need time.

Unfortunately, ion radiation penetrates the hull and causes the plasma power grid console to explode. Torres reports to Janeway that they lost the tractor emitter relays with no way to repair them in time to save the Talaxian ship.

Neelix arrives on the bridge as a visual communication comes from the Talaxian ship. On the screen captain Acrux begs for the help of Voyager. Neelix inquires as why not simply use the transporters to beam over the Talaxian crew. Chakotay explains that there is no way to guarantee that their pattern won't dissolve during the transport due to the ion interference.

As Voyager approaches the stranded ship, Janeway informs Acrux that her ship will try to extend their shields around them. He asks her instead to beam them out as their situation has worsened due to a hull breach.

By the time Voyager reaches the Talaxian ship, her shields aren't powerful enough to protect them. After a comment by Paris, Janeway decides to uses the ship's landing struts as grappling hooks on the Talaxian ship.

Voyager drops her shields as Paris maneuvers the ship on top of the Talaxian ship and "grapples" onto its hull. Hampered by the ship-wide power loss and the added mass of the rescued ship, Paris is unable to maneuver with the same level of skill and runs into the vortex's wall. The resulting impact damages one of the landing struts and the already weakened hull of the Talaxian ship gives way under the pressure.

Just as the structural integrity field of Voyager is about to collapse, Janeway orders for the transport of the Talaxian crew despite the danger. Neelix rushes to the transporter room to give assistance. When he entersm he finds the transporter operator trying to compensate for the ion disturbances and transport the Talaxians aboard. But before they can materialize, they disappear again in a quantum fissure.

Talaxian ship in the Ion Vortex

Voyager grapples the Talaxian ship with its landing struts 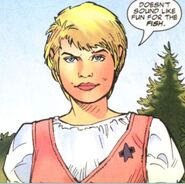