4991.3
"The Survival Equation" is the eighth issue of John Byrne's Star Trek: New Visions comic series. It was published in September 2015 and was a sequel to TOS episode & Star Trek 11 novelization: What Are Little Girls Made Of?.

Andrea, Ruk, Exo III—names that conjure grim memories for James Kirk. What, then, happens when the killer androids show up by the dozens? Plus, a special guest-star who's bound to surprise! All courtesy of photoplay wizard John Byrne!

Captain's log, stardate 4991.3… USS Enterprise in orbit around Wrigley's Pleasure Planet, for a period of R&R for the crew.

During their shore leave, Kirk was stunned to see Andrea serving as a hostess. Kirk beamed her up to the Enterprise and had Leonard McCoy examine her. She had no idea who they were or how they knew she was an android, so Christine Chapel told her about their experiences with Roger Korby and Aaron Brown on Exo III. Scans showed that this Andrea unit was only three weeks old.

Captain's log, stardate 4550.9… Returning to the surface of Wrigley's Pleasure Planet with the Andrea android — and this time with Science Officer Spock.

Kirk and Spock confronted Wrigley, the proprietor, who confessed to having purchased 16 Andreas from Kirk's brother, with 12 on order. When Kirk said his brother was dead, Wrigley played back recordings of the business deal, revealing the "brother" to be Harry Mudd. Mudd's molecular structure had been altered to resemble Kirk the last time they'd met. Hails to the Federation science team on Exo III were not answered, and Stella Mudd confirmed over subspace that Harry was missing.

Captain's log, stardate 4992.8… Entering standard orbit around planet Exo III. A dead and frozen world, unchanged since last we were here, months ago. Unchanged in hundreds of thousands of years. Also seemingly unchanged, the living quarters Korby created from the chambers hollowed out by the Old Ones.

The science team's vessel was missing, apparently having been commandeered to deliver androids. Kirk, Spock, McCoy, and Scott located machinery covering an area of 1,500 square kilometers, so they beamed down four security guards to help. Two guards located a matrix chamber, but were killed before they could report in by Ruk. An Andrea unit stunned Kirk and McCoy. A second Ruk attacked Spock and Scott, but Andrea stopped him from killing them.

When Kirk and McCoy awoke, they faced Mudd, who proclaimed that his androids would obey him. But Ruk was networked with the computer memory pool and recalled the equation that the original Ruk had figured out: survival overrides other programming. Ruk killed the leader of the Andrea units for working with Mudd. As other Ruks prepared to attack, the remaining security guards arrived and destroyed them. Mudd was apprehended. McCoy told Mudd that a scientific breakthrough might be able to restore his original appearance.

Spock deactivated the Exo III machines, breaking subspace links with the off-world Andreas. Scott expected that they'd all be shut down within a few days.

Referenced only
Old Ones 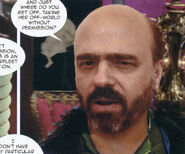 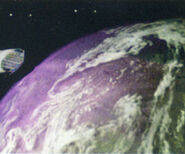 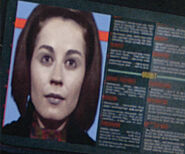