32641.2
"The Swift Spoke" is a Waypoint comic set as a prequel to Star Trek: Voyager. It was published in IDW Publishing's Waypoint Special 2019.

Second Officer Janeway's personal log. Stardate 32641.2.
The Billings has been invited to Arali Prime to meet with the Adegeda, a friendly but planet-bound people.
I have the honor of commanding the away team that will make first contact.
I must admit, I'm a little nervous about the mission. The Adegeda's planet has a particularly opaque atmosphere — not only does it prohibit beaming down, but sensor scans have returned bizarre readings. We don't quite know what to expect when we reach the surface. And then there's the security officer for this assignment, Mr. Tuvok.
The last time we were on a mission I commanded, he dressed me down in front of three Starfleet admirals for failing to observe proper tactical procedure.
Here's hoping this little adventure goes better than that one.

The team's shuttle safely traverses the planet's thick atmosphere and lands at the designated coordinates. The surface is bleak, but a few towering, green crystalline structures are nearby. The crystals change shape, reforming into the Adegedan ambassador and associates, and they welcome the away team. A loud sound and red light flash burst across the landscape, and Janeway asks if a storm is due. The ambassador's response is gibberish, but Ensign Probert confirms that the universal translator is working properly.

Another loud burst occurs, and suddenly two huge airships above them are engaged in battle. The landing party flees from underneath the battle site when another burst flashes. Now the team is running across a lava-covered landscape near an erupting volcano, with the airships nowhere in sight. As the team tries to reach their shuttle, Janeway looks back and notices that the ambassador's group seems serene, as if they are in a safer location. She notes that each flash bring with it a different environment.

There is another flash, and now a wrecked airship is plummeting directly above them. They run as fast as they can. Moments before impact, however, another flash brings them back to the environment they saw when they first landed. Realizing that they have to depart before they shift back to the environment with the crashing airship, Janeway apologizes to the ambassador, promising to figure out a better way to communicate once they return to the ship. The ambassador understands, and the shuttle takes off moments before the environment changes to a large explosion.

Janeway and Tuvok discuss the encounter on the trip back, theorizing that the planet shifts dimensionally with each light flash and is not entirely within their reality. Tuvok is curious to know how such an environment would affect the societal evolution of the natives. 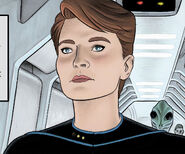 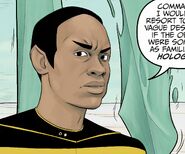 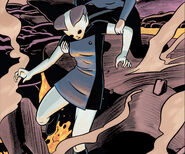