"The Terratin Incident" was the 11th episode of Star Trek: The Animated Series in the show's first season, aired during the week of 17 November 1973. The episode was written by Paul Schneider, directed by Hal Sutherland and novelized in Log Four by Alan Dean Foster.

VHS teaser
Investigating a mysterious radio transmission, the USS Enterprise is bathed in a strange light and all organic matter (including the crew) begins to shrink.

Captain's log, stardate 5577.3.
We are approaching the remains of the burnt out supernova Arachna. Requested update survey will begin with measurements of its radiation and volume expansion.

Captain's log, stardate 5577.5.
Our limited power attempt to escape the planet's gravity has failed. Undefined wave bombardment continues, resulting in a contraction of our bodies, or an expansion of the ship, by a factor of point three.

Captain's log, stardate 5577.7.
We will lose effective control of this vessel at the point when we've become approximately one centimeter tall. At the present rate, we will reach this less-than-fingernail length in 32 minutes.

Captain's log, supplemental.
There is one last measure we can take to try and stop the bombardment of the lethal spiroid wave. There must be some intelligence behind it. I'm going to attempt direct communication by beaming down to the planet's surface. We have no reason to expect success, but our height is little more than 2" and even this action will be beyond us in 15 minutes time.

Captain's log, supplemental.
The Lilliputian city is to be taken to Verdanis and relocated on a fertile and well-watered plain. Then we'll be able to call the Terratin incident closed.

Captain's log, stardate 5525.3.
We are approaching the remains of the supernova Arachna. Initial close-in visual observation correlates with advance telescopic probe-pictures. We are moving deeper into the nebular region at standard observation speed. Location survey will commence, as requested, with extensive measurements of expansion rate and radiation levels. Certain new types of radiation have already been detected. At present they existed in minute amounts and constitute no danger to either ship or mission. Engineer Scott is taking precautions.

Captain's log, stardate 5525.4.
Our attempt to escape this world's gravity on limited power has failed after the ship's dilithium supplies have been wiped out. We are currently in a low but stable elliptical orbit. Main engines and circuitry are one hundred percent incapacitated. Unidentified radiation bombardment continues, resulting in either a contraction of our bodies or an expansion of the ship by a factor of three. 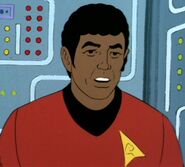 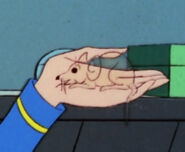