investigating the derelict spaceship Defiant Captain Kirk is missing and presumed dead! Likewise the spaceship Enterprise is in danger of being trapped in a alien energy space web!

The Tholians and the Defiant have appeared many times throughout Star Trek since their introduction in The Tholian Web:

After passing through the interphase the USS Defiant fell into the hands of the Mirror Universe Tholians a hundred years in the past. In a Mirror, Darkly shows the fate of the Defiant and has the Tholians use their web once more.

The Tholians, or at least their subject race the Chakuun appear in Early Voyages and an ongoing conflict with the Tholian Assembly is frequently referenced.

The first retrieval of the Defiant, in 2288. The interphase duplicated the ship at this point, leaving one still to be rescued in 2376.

The Tholians, the Defiant and the interphase all appear in The Sundered, this time facing off against Captain Sulu of the USS Excelsior.

Interphase see the crew of the USS da Vinci retrieving the Defiant from the interphase.

Captain Kirk in an EV suit

a victim of the madness 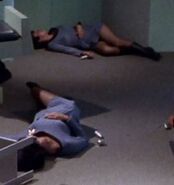 more dead crew, one holds what appears to be a knife
Add a photo to this gallery

Retrieved from "https://memory-beta.fandom.com/wiki/The_Tholian_Web?oldid=674766"
Community content is available under CC-BY-SA unless otherwise noted.