Star Trek: The Original Series No. 4

6134.6
The Time Stealer was the fourth of 11 TOS stories produced by Peter Pan Records. It was initially released in 1975 as an audio production along with three other stories. It was subsequently repackaged with a nine-page comic book and as a solo audio product. This was the fourth of seven stories set during Captain James T. Kirk’s first five-year mission aboard the USS Enterprise and the third of six with an associated comic book.

In this story, the crew of the Enterprise tried to prevent an orbiting temporal disruption from affecting an inhabited planet.

Ad for Peter Pan Records
“Federation freaks will hail these full-length adventures as the hottest thing since Vulcan ear-muffs! “A Mirror for Futility,” “The Time Stealer,” “Logistics of Stampede” and “To Starve a Fleaver,” all on a high-quality 33 1/3 RPM disc! Warning: do not play at Romulan sock-hops!”

Captain's log... 6134.6 : The mysterious... time slow-down we're experiencing has affected... not only every crew member on board... but all the Enterprise's instruments and computer banks... it's as if... time itself were winding down... and us with it...

Captain's log, supplemental : Konrac and Klee were sincere. Their entire race was counting on them to wipe out the menace that had held their culture locked in a standstill for centuries. And now they had the help of a starship!’’

Captain's log... stardate 6453.2. After using a long-range tractor beam to pull the Gola behind us for several days, we finally released it moments ago... as we orbited the star sun Spock’s calculations had pinpointed as the parent. All of us watched the screen in eager anticipation... 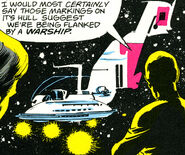 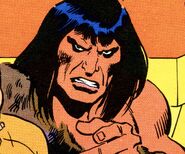 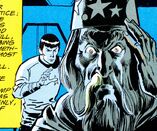 Konrac in the transporter room