The Trial of Captain Kirk

The Trial of Captain Kirk

1926.2
Sky pirates raid the stars — and Captain Kirk is charged with treason! — "The Trial of Captain Kirk" was a Star Trek: The Original Series comic book story published by Gold Key Comics in 1974, their 24th issue. If was the fifth of 22 stories written by Arnold Drake and the 22nd illustrated by Alberto Giolitti. In this story, Captain Kirk was charged with accepting bribes from bandits illegally mining a rich asteroid field.

A brilliant service record and a heroic commander face public disgrace and imprisonment as Captain Kirk battles vainly against a shadowy conspiracy! Can he and the crew of the starship Enterprise crack the mystery before the prison door shuts behind him?

The USS Enterprise hunts iron smugglers in System C-71's historic, iron-rich asteroid belt. Excessive mining has destabilized the belt and threatens the orbits of nearly planets, so it has been outlawed. Spock notices an asteroid not on the charts, so Kirk and Montgomery Scott inspect it in environmental suits. It suddenly fires its engines — it is a spacecraft. Rather than surrender, the smugglers retaliate with phaser fire, so the Enterprise destroys the ship.

Kirk reports the encounter, then is recalled to Earth. As he disembarks, Kirk is arrested by security officers to face a preliminary hearing pursuant to a court martial. Video evidence shows Kirk accepting a bribe of seven million credits from the leader of the bandits, Liji Bragg. The supreme chairman and vice chairmen Fado and Hajara tell Kirk not to leave the city.

Captain's log, star date 19:26.3. I have the freedom of the city and a limited time in which to fight back against the charges aimed at me. What I need desperately is information — and the anonymity with which to gain it!

Cosmetic surgeon Dwayne Stiller makes Kirk's face temporarily look like a Dridian. Disguised, Kirk shares coffee with Fado's assistant. She reveals that the video had been taken by Nuri Jakarz, and that Kirk's indictment might lead to Fado becoming supreme chairman.

Meanwhile, Spock arranges for the Enterprise to test some new navigational equipment, which will allow the starship to return to the asteroid belt without telling Starfleet. With X-ray radar a second pirate ship is exposed. It flees, then fires a missile towards an inhospitable planet, possibly dumping incriminating evidence. Scott uses identity transference equipment to copy the brain patterns of Leonard McCoy and Spock into cerebot probes. The "Spock" robot tracks the missile's guidance system, and the "McCoy" robot salvages the evidence.

On Earth, Kirk sneaks into Jakarz's house. Jakerz owns a special effects company, and Kirk recognizes miniatures of two cities from movies he'd seen. He finds tapes of himself and Liji Bragg, inserts them into a projector and merges them — forming the fake evidence. Jakarz catches him red-handed, but Kirk identifies himself as a reporter for Drid Interstellar News. Jakarz promises to do an interview and lets Kirk leave.

Vice chairman Hajara catches Kirk outside Jakarz's house, just as his face reverts to normal, and brings him inside at gunpoint. Hajara explains that he paid the bandit leader to be exposed in order to frame Kirk. Either Fado or Kirk will get convicted, leaving Hajara as the next supreme chairman. Before Hajara can fake a suicide for Kirk, however, the captain strikes him with miniature city props and knocks him out. The confession, supported with evidence provided by Spock and McCoy, exonerates Kirk. 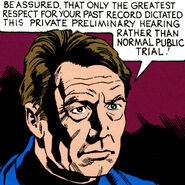 Chairman of the Supreme Council. 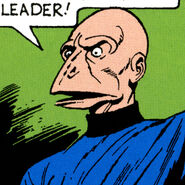 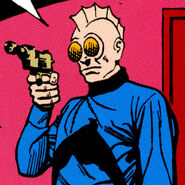 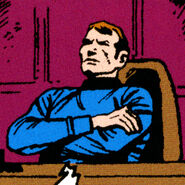 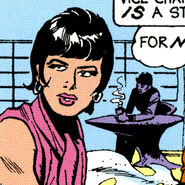 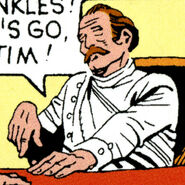 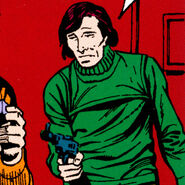 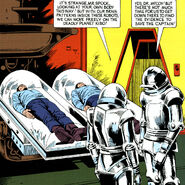 Cerebots of Spock and McCoy. 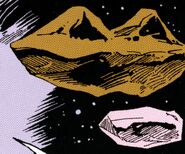