The Original Series (Random House) No. 3

The Truth Machine is a Star Trek: The Original Series young adult novel by Christopher Cerf and Sharon Lerner with illustrations by Jane Clark. It was one of four books published by Random House in 1977.

Copyright page
In an attempt to acquire the secret of Warp Drive to power their warships, the Armies of Fomalhaut V trick the crew of the Enterprise into "beaming down" to their planet.

Captain's log, stardate 3198.4. Our mission is to explore this unknown part of the galaxy for Starfleet Command. We are putting the new planets we discover on our starmap…

Nyota Uhura picked up a distress call from Fomalhaut V and received images of people in a city being stampeded by dinosaurs. Although computer records showed there were no inhabitants on the planet, James T. Kirk couldn't ignore their pleas for help. He ordered the ship into orbit and beamed down with Spock and Leonard McCoy armed with phasers ready to repel the dinosaurs. However, they materialized in an empty desert — it was a trap. They were captured by Colonel Kragg of the rebel Armies of Fomalhaut.

At gunpoint, Kragg led the landing party underground into a cavern containing an enormous military base full of warships and inventions. Their army was intent on attacking the Federation and had all the tools they needed, except for the secret of warp drive. When Kirk wouldn't volunteer the information, Kragg gave him 15 minutes to choose a victim for a device that would extract the data. Spock suggested that he would be the one most likely to resist, so he was subjected to the truth machine.

Unfortunately, the machine was too powerful, and Spock not only described how dilithium was used to channel engine power, but he also drew up a set of schematics. Within days, a Fomalhaut warship was outfitted with a warp engine and moved to a launch pad. The ship powered up, then suddenly exploded. In the confusion, Spock used a Vulcan neck pinch on their guards and Kirk captured Kragg. They transported back to the Enterprise, put Kragg in the brig, and alerted Starfleet about the base.

Spock confessed that although he was compelled to tell the truth, he neglected to mention how to properly cut the dilithium crystals, and luckily, they never asked him. 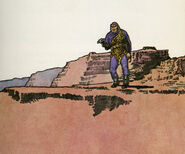 Surface of Fomalhaut V.
Add a photo to this gallery

Retrieved from "https://memory-beta.fandom.com/wiki/The_Truth_Machine?oldid=696539"
Community content is available under CC-BY-SA unless otherwise noted.