Three hundred years ago, the SS Valiant was destroyed during an ill-fated attempt to cross the legendary galactic barrier. Starfleet had always assumed that the Valiant had perished with all hands aboard, until a pair of unusual humanoids arrive at Starbase 209, claiming to be the descendants of a handful of Valiant survivors who found refuge on an M-class planet beyond the barrier.

Even more shocking, the visitors warn that a hostile alien species, the Nuyyad, are preparing to invade our galaxy. Uncertain of how much of the strangers' story to believe, Starfleet orders the USS Stargazer to investigate at once.

Lieutenant Commander Jean-Luc Picard is second officer on the Stargazer. A young man who has yet to command a vessel of his own, he soon develops a special bond with one of the visitors, a strikingly beautiful woman who has inherited mysterious psychic abilities from her alleged Starfleet ancestors. But can Picard truly trust her?

His doubts deepen when the Stargazer is ambushed by Nuyyad warships, leaving the captain dead and the first officer incapacitated. Picard suddenly finds himself in command—and facing immediate danger. Trapped on the wrong side of the barrier, cut off from Starfleet, he must now rely on questionable allies and a crew uncertain of his abilities. And not only the Stargazer, but perhaps the entire Federation, may depend on the decisions he must make.

The Valiant is a gripping saga that explores an untold chapter in the life of Jean-Luc Picard—and reveals the making of a captain!

The SS Valiant and its crew of 88 are several years into their exploratory mission under Captain Carlos Tarasco. An intense magnetic storm throws the primitive spacecraft another year’s journey distant from Earth and beyond the confines of our galaxy. After weeks of undergoing repairs, the ship attempts and fails to reenter the galaxy through the galactic barrier on December 30th. The warp drive is burned out and causes other severe damage, and six crew members are killed, including XO Amir Rashad. Assistant Engineer Geirrod Agnarsson is subjected to the same effects that will later affect Gary Mitchell, and he quickly develops into an arrogant godlike threat. When he tries to seize control of the ship, Agnarsson is incapacitated and incarcerated, though he soon escapes, killing three security officers. Tarasco hunts his crewman down, intending to eject him into space, though Agnarsson has grown too powerful, forcing the crew to abandon ship while Tarasco destroys it, himself, and the burgeoning god.

Most of the crew has survived the Valiant’s destruction, though they are forced to spend weeks at low speed to reach the nearest habitable planet. Over time, the survivors realize that they have developed their own limited telepathic abilities, though they are unable to practice telekinesis unless multiple people work together. They use these powers to safely land on the untamed world where they will eventually build a great city, Magnia, based on the post-World War III recovery designs of French architect Goimard.

Seven months into the USS Stargazer’s latest tour of duty, second officer Lt Commander Jean-Luc Picard has found a mentor in Captain Daithan Ruhalter. However, the ship’s new XO, Commander Stephen Leach, often finds himself at odds with Ruhalter and he blames the “upstart” Picard for this poor relationship. The tripartite tension later threatens the mission, and the captain reveals to Picard his dissatisfaction with Leach and his intent to soon replace the XO with Picard. The Stargazer is ordered to investigate the rumors of an alien species, the Nuyyad, that is reportedly planning to invade the Federation. The warnings were delivered by a pair of Magnians, humans with limited ESPer abilities claiming to be descendants of the Valiant crew. Though everyone is wary of the Magnians’ story, the Stargazer is ordered across the galactic barrier with one of the Magnians, Serenity Santana, as a guide, and a Kelvan technician, Jomar, to provide technical expertise in combating the Nuyyad. Both Picard and security guard Lt. Peter Joseph get to know Santana and come to believe she can be trusted, though they remain the minority. Ruhalter approves Jomar’s advancements to the ship’s shields, but deems his method for phaser upgrades to be too risky.

The socially awkward Dr. Carter Greyhorse becomes increasingly enamored of navigator Lt Gerda Asmund, though she barely notices him until he surprises her in a fight and the two begin a secret affair. He tries to distract himself by researching the artificial production of the Betazoid neurotransmitter psilosynine.

The Stargazer breaches the barrier without incident, but is quickly intercepted by a Nuyyad warship. The Starfleet crew barely manages to destroy the enemy, but the ship suffers severe damage, Captain Ruhalter and five others are killed, and Commander Leach and Santana are badly injured and lapse into comas, leaving Picard in command. Many of the crew are uncertain of Picard due to his limited experience and his relationship with Santana, who they suspect led them into a trap. Weapons officer Lt Werber actually leads a failed mutiny attempt, though Picard gains the support of several other officers, notably his acting XO Gilaad Ben Zoma, chief engineer Phigus Simenon, and newly promoted gunner Lt. Vigo. With many systems damaged or offline, Picard orders the ship to the Magnian colony in the hope that they can repair the Stargazer. They find another Nuyyad ship in orbit of the colony, but Vigo transforms the ship’s shuttle complement into torpedoes, enabling them to destroy that ship too. However, Vigo is wary about the failure of key systems during the battles and suspects sabotage.

Magnian governor Shield Williamson thanks Picard for freeing them from the Nuyyad and apologizes for having been forced to lead the starship into a trap. He also reveals that the Magnians only came under fire when the Nuyyad learned of their shared heritage with humanity. The two men agree to an exchange of supplies and technicians to repair both the starship and the colony’s hobbled defenses. Picard reluctantly approves the temporary assignment of several Magnians, including the healed Santana, to operate vastly improved sensors and tractor beams. Together, they are able to easily destroy two more Nuyyad ships that approach the colony, then the ship sets course for the enemy’s staging area. Though the attack was initially a ruse by Picard to flush out the saboteur, he commits to the offensive when he realizes the edge provided by the ship’s enhanced systems, augmented by Magnians who are made more powerful with doses of psilosynine. Santana discovers that Jomal is the saboteur and attempts to stop him, though she only succeeds thanks to the intervention of Picard, Ben Zoma, and Joseph. Jomal reveals that his disruption of key systems was inadvertent; he’s actually been trying to augment the ship’s weaponry without permission. His advancements prove critical when the Magnians begin to exhibit too much power and they are sedated for their own safety as well as everyone else’s. The Stargazer attacks the Nuyyad station and half a dozen ships there, ultimately emerging victorious. The Magnians and Jomal return home, and Picard is promoted to captain of the Stargazer. 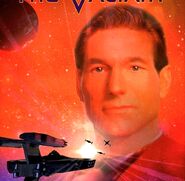 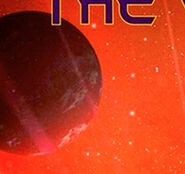