"The Void" was the 161st episode of Star Trek: Voyager, the 15th episode of the show's seventh and final season, first aired on 14 January 1997. The episode was written by Raf Green, Kenneth Biller and James Kahn and directed by Mike Vejar. The USS Voyager becomes trapped in a void of space where ships prey on each other.

As Neelix serves a meal which Seven has prepared for Janeway, Chakotay, Tom and B’Elanna, Voyager suddenly experiences turbulence, and is pulled into a void. Neelix and Tom realize an approaching ship has opened fire on Voyager.

Another ship approaches and fires on the attacking ship, but then proceeds to fire on Voyager, taking down her aft shields. As the attacking ship transports supplies and dilithium from Voyager, Janeway orders the attacking ships engines to be disabled. But it too late, and the ship jumps to warp. Another vessel approaches, but does not initiate hostile action; instead, it hails Voyager, and the captain of the ship compliments Janeway for fighting off her attackers.

The captain of the friendly ship comes onboard Voyager, tells her why she was attacked, where they are, and how they got into "the void". He offers to trade with Janeway for Voyager's photon torpedoes, but Janeway tells him that they do not trade weapons because they do not know how they will be used.

Seven of Nine devises a plan to propel them out of the void and back into normal space. It is, however, risky and complicated. As Voyager implements Seven's plan and nears normal space, Voyager is chucked back into the void. With the warp core offline and supplies running low, Janeway orders their attacker to be found, so that they can retrieve their stolen supplies.

When Voyager finds their attacker, the ship has been badly damaged. There are no life signs aboard and all technology and supplies have been "picked clean". Seven of Nine states that not everything of value has been taken: the casing of the warp core is made of an element that can be converted into a power source.

Inside the casing, Seven and B’Elanna find an injured humanoid hiding and clinging to a ladder. He is taken to sickbay, but being afraid, he refuses to allow the Doctor near him. Although hurt, he has a voracious appetite.

Voyager tracks Valen down and disables his shields. When he does not return what belongs to them, Janeway contemplates taking more than what is theirs. Janeway goes to her ready room for coffee when Tuvok and Chakotay beep; their inventory shows that they recovered less than half of what was taken.

Janeway attempts to find a loophole in the Federation charter and suggests an alliance, where they would pool their resources, protect their allies, and "ultimately get the hell out of this place".

"Captains Log, Stardate: 54553.4: For the past several days we’ve been making every effort to recruit members into an alliance but it hasn’t been easy."

Kathryn and her officers tell a captain and his crew of their new alliance, noting the benefits and the rules of such an alliance. She asks him to consider it and offers complimentary food and medical care to him and his crew.

Seven notifies Kathryn that her phase coupling has been stolen. Janeway tells her that it was not stolen, but given to a prospective member. Seven says it is inefficient to give things away. As Janeway leaves, she turns around and apologizes to Seven for "giving away her favorite phase coupling".

Seven goes to sickbay where she finds the Doctor and the now-named humanoid, Fantome, listening to music. Seven realizes that he can hear and tries using sounds and instruments to instruct him to pick the instruments up.

Neelix prepares B’Elanna and Tom a meal but are called away early when all senior staff are ordered to the bridge. The ship is set on red alert because another ship has just come into the void. As Janeway orders weapons targeted on Valen's lead ship, Valen hails Voyager. Janeway tells him they will protect the new ship, but Valen tells her he has a crew to feed and opens fire on Voyager. Voyager fires photon torpedoes but only reduces Valen upgraded shields to 80%. A third ship approaches Mr. Garon and fires on the other two ships.

Garon hails Voyager and notifies her that they have decided to join their alliance.

The Doctor takes Fantome, now no longer a patient, to the mess hall. A prospective member of the alliance becomes agitated upon seeing Fantome, telling Janeway his species is vermin. Janeway offers those lurking on his ship to be transported to Voyager.

Within sickbay, Fantome talks to several of his kind by using music. The Doctor and Seven watch as they talk together. When Janeway enters, Seven remarks that they have almost developed grammar and syntax in their musical language. Janeway is called to engineering.

On arrival in engineering Janeway is told they have procured the modulator that they required. Janeway asks where it came from, but Bosaal, who acquired it, does not wish to reveal how he acquired it. When Janeway asks if he stole it, and does not get a response, she orders the modulator to be disconnected. She tells him to take it and get out.

As Janeway and Chakotay talk, she realizes that they should have never allowed Bosaal to join their alliance. Janeway and Chakotay enter astrometrics, where the two aliens who developed the spying technology talk with Bosaal and Valen about a prospective raid on Voyager. Tuvok believes they will attack within the next few hours to steal the ship's food and supplies. Janeway prepares to leave the void as soon as possible, so they will not have time to run a test on B’Elanna’s modulator.

Janeway and the alliance fleet prepare to leave the void when the funnel begins to form. Bosaal and Valen's ships, however, have now opened fire on the fleet. Janeway orders all ships to return fire on their designated targets. Once shields have been penetrated, the Doctor and Seven beam Fantome and his friends to the enemy ships. Janeway tells B'Elanna to hurry the modulator online.

Both enemy ships slow to a halt. Voyager receives a hail from Fantome and his friends, telling they have disabled both ships's engines. The alliance fleet activates the shield modulator, travels the funnel, and jumps to warp, where they successfully exit the void.

Janeway says her goodbyes to her friendly alliance, remarking to Chakotay that it was almost like being part of a Federation again. 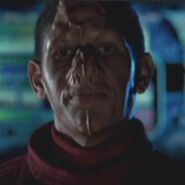 Voyager thrown back into The Void.