The Void of Storms

The Void of Storms

unknown
"The Void of Storms" was a 20-page TOS comic strip. It was the 34th weekly story arc in the UK comic strips series, published in ten installments in Valiant and TV21 in 1972 and 1973. In this story, the crew of the USS Enterprise inadvertently released a banished coup leader.

Teaser, 6 January 1973
Traveling in a shuttlecraft to pay an official visit to the planet Zentar, Captain Kirk and Mr. Spock were brought down by an exiled criminal scientist named Zar. Zar's spy, his cousin, Lieutenant Vrett, passed the news of a “crash” to Enterprise, where Scott was in temporary command…

While exploring a previously uncharted system, the USS Enterprise is caught in a turbulent maelstrom, but is rescued by a Zentarian guardship. Making official first contact, James T. Kirk and Spock visit Zentar Watchdog Five, then travel aboard one of their shuttles to Zentar. En route, the shuttle is seized by a tractor beam and forced down by a robot controlled by the criminal Zar. As Pavel Chekov and Hikaru Sulu investigate, Zar silently beams up to the Enterprise with his robot and stows away. The shuttle is found with its door wrenched open, its passengers unconscious in Zar's residence.

Kirk meets with the president of Zentar, who describes Zar's bloody coup attempt that ended with Zar's robot army fleeing to the distant asteroid Zettin and Zar being placed in exile. Technicians devised the Void of Storms to quarantine the asteroid. The president deactivates the turbulent field of radiation so that the Enterprise can depart safety. Once the starship has cleared the dangerous region, Zar deactivates security systems in order to make an escape, but he and the robot are spotted. As they steal a shuttlecraft, they kill a security guard and two crewmen.

Kirk shows images of the incident to the president, who recognizes Zar and realizes he will head for the asteroid to retake control of the robot army. Kirk takes responsibility and promises to go after Zar. The president warns that the Void of Storms will have to be reactivated if Zar escapes — which would destroy the Enterprise and maroon survivors on the asteroid.

Kirk takes command of an assault force of three armed shuttles, but the ships are repelled by imposing weapons fire from the robots on the asteroid. Kirk retreats behind mountains and deploys a probe to assess Zar's outpost facility. Meanwhile, Zar's robots are boarding rockets to invade Zentar. Kirk's shuttles relaunch and strategically bomb the fortress with missiles. A probe locates Zar near the outpost's rocket launch pad. The shuttles target its roof with their final salvos, then retreat as a huge explosion wracks the asteroid. Kirk's shuttle pilot believes they've seen the last of Zar and his robots. 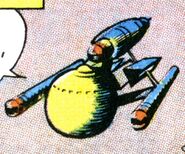 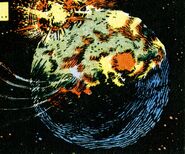 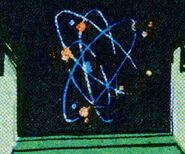 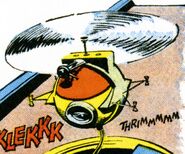