The Original Series No. 20

Spock's mother is also a patient in the hospital, and Kirk soon becomes involved in the complex drama of Spock's family...

Suddenly, patients are dying, and Kirk suspects the unthinkable—murder on Vulcan! But can he convince the Vulcans that something as illogical as murder is possible? Until the killer is caught, everyone is in danger!

The Enterprise is involved in a skirmish with the Klingons in disputed space, which leaves a crewmember, Remington, paralyzed. Spock reveals an experimental treatment that could save him, nerve regeneration, has recently been developed by Vulcan scientist Sorel and human doctor Daniel Corrigan. The treatment involves placing the patient in stasis and allowing the body to regenerate itself. Spock's mother Amanda is currently undergoing the procedure, which is how Spock is familiar with it.

Kirk, Spock and McCoy take Remington to Vulcan to undergo nerve regeneration treatment. Shortly after arriving on Vulcan, power failures deactivate the chambers containing Remington and Sorel's wife, T'Zan, killing them. Sorel nearly dies from the severing of the bond with his wife, but is saved by a healing mind meld performed by Corrigan and Sorel's children. Kirk realises the power failures were the result of deliberate sabotage and must be murder.

An attempt to track which computer was used to sabotage the stasis chambers is foiled when the memory banks overload, starting a fire. Spock, Kirk, and Sarek fight the flames that threaten Amanda's stasis chamber, receiving moderate burns in the process. The fire is eventually brought under control and Amanda's stasis remains intact.

Sorel's daughter, T'Mir, and Corrigan perform the Bonding ritual in a private moment only the two of them share. The next day, T'Mir's suitor, Sendet, goes mad with jealousy and attacks Corrigan, trying to sever the telepathic bond between the couple. His alibi for the murders is revealed to be false, and the Vulcan Healers force him to undergo a Verification ceremony. During the Verfication's group mind meld, it is discovered that Sendet is a member of a the Followers of T'Vet, a minority Vulcan group hoping to return Vulcan to its warlike past. The Healers in the meld discover he is not the murderer, however. Sendet and his associates are allowed to leave Vulcan for another planet.

The real murderer is Eleyna Miller, Sarek's assistant who has become obsessed with him and is trying to kill Amanda. She takes Kirk into the desert, supposedly for a romantic assignation, then pushes him from a low ledge and leaves him for dead. Kirk fights off a Le-matya with an injured leg, but survives until McCoy finds him. Eleyna then tries to kill Amanda by programming the stasis chamber to revive her too early. Amanda is saved by Spock and Sarek, who join her in a family mind meld to bring her body to full consciousness. Eleyna is taken into custody to undergo psychiatric treatment. 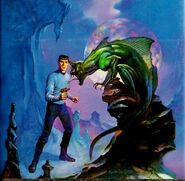 Spock trains a Vulcan phaser on the le-matya.