The World Beneath the Waves

The World Beneath the Waves

19:26:03
Kirk plunges into a watery world of hostile mutants! — "The World Beneath the Waves" was a comic book story published by Gold Key Comics in February 1977, the 43rd issue of their TOS series. It was the 15th comic written by Arnold Drake and the fifth drawn by Alden McWilliams. In this story, Leonard McCoy's estranged daughter Barbara McCoy joined the USS Enterprise crew to explore an underwater civilization.

The strange water world was threatened from within – threatened by its own genes! The king's answer was, kill the rebels at birth! Thus the strangest of all civil wars was brewing as the crew of the Enterprise prepared to visit...The World Beneath The Waves.

The Enterprise is diverted to pick up a technical advisor and a new assignment. At the coordinates, a small craft lands on the hangar deck, and Barbara McCoy disembarks. Her father Leonard greets her with a hug. James T. Kirk asks why she will be needed on a mission when the ship already has three xenobiologists aboard. She mentions having written a paper on adaptability to severe climate change, and has prepared a mission briefing which will explain.

In Barbara's quarters, Leonard is enthusiastic to get to know Barbara. But his daughter is reticent, sniping at him not having done so in the past and not looking to bond. Leonard remarks she has a bitter streak. Overhearing from the doorway, Kirk steps into the room to address the concerns. He says that in the brief time he's known her, he's become fond of her, but no family tension will be allowed to interfere with the smooth operation of the ship. She acknowledges the order with a salute. Kirk suggests he and Leonard review the mission briefing. Outside, Leonard laments that if he hadn't been "out here chasing glory," he might still have a family. Kirk reminds him of duty handbook paragraph 28, sub-paragraph G that "the long and disorienting tours of SF duty recommend no long-term relationships."

A virtual-reality briefing on Bwuja shows that seven thousand years ago, radioactive debris from an ancient supernova incinerated the planet's surface, completely destroying the cities of the Bwujans and boiling the tops of the oceans. Having seen the storm approach for several centuries, a small portion of Bwujan civilization with gill transplants managed to survive in deep trenches below the sea. Over time, the surface cooled and gill mutations gave the Bwujans natural water-breathing ability. Radiation had since subsided on the surface. The Enterprise was assigned to study the underwater society as it is today, having gone through the fastest natural adaptation on record.

Scott visits Barbara, telling her that Leonard is a decent man. But Barbara says the job of his daughter is vacant.

Kirk, Spock, Leonard and Barbara beam to the surface in diving gear. They ingest comp-ox capsules, which provide enough oxygen to breathe for 24 hours. Swimming down one mile, they are met by a trio of Bwujans riding large, purple, domesticated Bwujan porpoises. They lead the landing party to an undersea city and an audience with King Raan XIV and Queen Saya, who speak via telepathy, which Barbara sees as another mutative adaptation to undersea life. She says they came to be friends and learn from them, but Raan calls them air breathers from another world, condemns them as part of air-breathing ancestors who "made the gods angry and destroyed our surface land," and says they will be tried and executed in two days.

Captives of the underwater world we had come to study, our march to imprisonment is interrupted by a sombre sight.

En route to their cell, they see a funeral procession, a baby casket with two pall bearers and six family members. Once in the cell, water is pumped out and they are in an air chamber. Hearing tapping from a wall, they phaser a hole and tunnel into another room containing air-breathing Bwujans, people who had been born without gills. One of them, Lojo, says one out of many thousands are born without gills. Publicly, they appear to be killed, but Raan secretly sends them to the air-filled caverns. Some try to climb to the surface, but mutated beasts called agaaras kill them. Lojo says Raan and Saya have lost their own child prematurely, and Saya can't bear another.

As the landing party follow the route of the climbers, they encounter an agaara, which charges and grabs Barbara. Leonard saves her life by distracting the creature with phaser fire. It drops her and chases him. Although it resists the phaser beams, it eventually breaks it apart before it can kill him.

When they reach the surface, they find a young boy who brings them inside a cave to meet his parents, former climbers now living on the surface. Tako, the boy's father, says 58 people live on the surface, 14 of whom have been born there. They don't try to help air-breathers below for fear Raan will have them all killed.

Spock suddenly cries out, and outside Kirk finds Spock held at knife-point by Raan, who had followed them. Lamenting his own compassion, Raan accuses the air-babies of building the world his priests warned of, air-breathers who will threaten his undersea world. He declares that the surface king has to die, and, dragging Spock into the cave with him, discovers their king is Doro, a child. His raises his knife anyway, but Saya appears and stops him. Doro is actually their own child. Saya had given birth to an air breather, but fearing that Raan would kill the child, Saya lied about its death and instead left it on the surface. Tako says they'd found the baby on the shore and raised it as their leader.

Realizing Doro could have been with them all along if Raan had been honest with Saya, Raan decides the child should live in the air caves near them. But Tako's wife proposes an alternative. She shows them her second child, who is a water-breather. Raan has an air-breathing child, and Tako has a water-breathing child. Following her logic, Spock suggests that the two families exchange children so both can live in their natural environments, and they all agree.

Back on the ship, Leonard and Barbara seem to have mended their differences. Spock observes that the forced child separations on Bwuja must have affected the McCoys.

The story took place at least three weeks after the events of TOS comic: "Furlough to Fury", unless Barbara McCoy had already started training for the Bwujan mission during the events of that story. 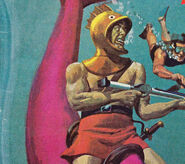 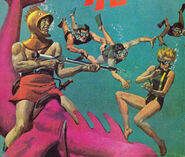 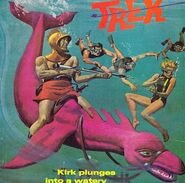 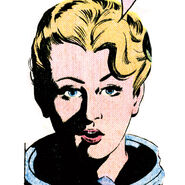 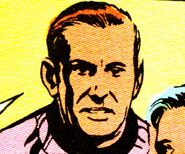 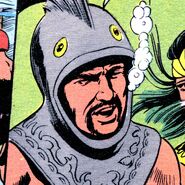 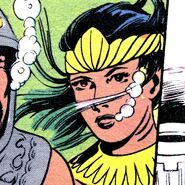 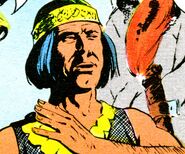 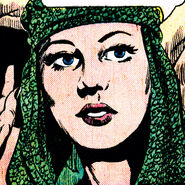 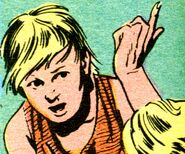 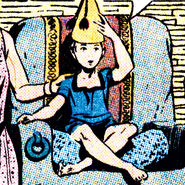 Amu and his high priest. 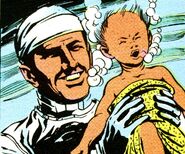 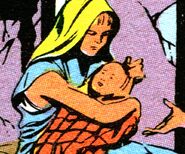 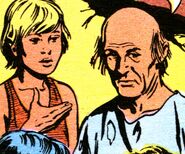 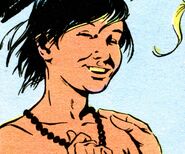 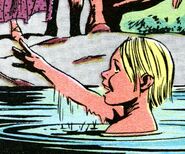 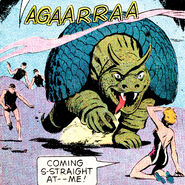 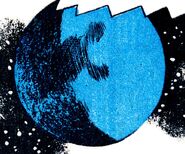