8141.5
1st star-spanning collector's issue! (part 1 of 4) – "The Wormhole Connection" was the first issue of DC Comics' February 1984 series of Star Trek comics. The issue was edited by Marv Wolfman, and written by Mike W. Barr. The art was penciled by Tom Sutton and inked by Ricardo Villagran, with Michele Wolfman and John Costanza credited as colorist and letterer, respectively.

Captain's log, stardate 8141.5
Though Klingon violations of the Neutral Zone are fairly frequent, they have been unusually numerous of late. The USS Gallant has been ordered to patrol this quadrant, putting an end to all such incursions of Federation space, as designated by the Organian Peace Treaty. The mission seems to be a simple matter of showing the flag. I expect no problems. Captain Bearclaw reporting.

Captain Bearclaw asks his science officer, Bryce, for a report on sensor readings. Bryce says he thought he saw a strange energy wave, but it moved too fast for an accurate reading. Suddenly, the USS Gallant is attacked by four Klingon battle cruisers. The log buoy is launched just before the ship is destroyed. As Captain Koloth celebrates with his fellow Klingons, his helmsman, Ensign Konom is horrified at the sight of what has just happened.

Captain's log, stardate 8145.3
Doctor Carol Marcus and Doctor David Marcus... my son... have returned to the Regula I base to continue their work and the crew of the Reliant has been relocated to Starbase 12 for medical attention and reassignment. The Enterprise has returned to Earth where I have requested an audience with Starfleet Grand Admiral Stephen Turner, concerning a matter of the gravest personal importance.

Admiral James T. Kirk meets with Grand Admiral Stephen Turner to request assignment as captain of the Enterprise. Turner relents, stating that Starfleet has taken the ship away from Kirk twice and that's lesson enough for him. Kirk gives Sulu the good news, which is piped throughout the ship. McCoy, Scotty, and Uhura elect to remain aboard as replacement crewmen report for duty. Saavik is assigned the position of science officer, the role served by her mentor, Spock.

Captain's log, stardate 8145.6
We have received our first assignment, and have left Earth orbit, en route to Section 14 of the Gamma Hydra system.

As the Enterprise approaches the Neutral Zone, Captain Kirk addresses the ship, specifically the newer crewmen. After Kirk's address, Ensign Nancy Bryce leaves one of the recreation areas and has a violent encounter with fellow ensign Bearclaw. Bearclaw blames the destruction of the Gallant, and his father, on the alleged incompetence of Bryce's father as science officer. Kirk dresses down both of them and reminds all of the new crewmen present that everyone will be treated and evaluated as an individual. Kirk reports to the bridge with Nancy Bryce in tow as Saavik informs him that the ship has arrived. Saavik also recommends raising shields, but Kirk decides against it as an attempt to lure the Klingons out of hiding.

Aboard a Klingon battlecruiser, Ensign Konom secretly transmits a signal to the Enterprise before the battle group attacks and seemingly disappears. The Klingon ships reappear and continue their attack. Kirk recognizes the group tactic and compensates, foiling the attack.

Captain Koloth's ship survives enough to retreat and mysteriously vanishes with the other surviving ship. When Saavik is unable to explain the Klingons' ability to disappear, Kirk snaps at her in front of the bridge crew as he leaves for the briefing room. Just prior to the department head meeting, Saavik visits Dr. McCoy in the sickbay to discuss Kirk's recent attitude toward her. McCoy explains that he's unconsciously comparing her to the recently deceased Captain Spock. McCoy meets with Kirk to discuss his problem with Saavik, reminding him that she's an individual and deserves to be treated thusly.

Captain's log, stardate 8148.9.:
Time is of the essence. The Klingons may reappear at any second, and we must be ready for them.

A meeting is held with the department heads to discuss the Klingon situation. Kirk asks if it could possibly be their cloaking device, but Scotty says that was "cracked wide open years ago." Saavik reports that an unidentified and anomalous energy wave was detected. Scotty recognizes the wave as one caused by a wormhole and that the Klingons must have found a way to stabilize one to enter and exit at will. While the Enterprise can't enter the wormhole in its present state, Scotty says he could rig the transporter to send a few crewmen and maybe a shuttlecraft. Saavik notes the disorienting effect wormholes have on the human psyche and volunteers for the mission based on her half-Vulcan lineage. Kirk has already chosen Saavik to fly the shuttlecraft as he and Nancy Bryce go on a reconnaisance mission using thruster suits.

Captain's log, stardate 8149.1.
Ensign Bryce and I are ready to depart, but one thing remains to be done...

Kirk orders Uhura to notify the Organians of the situation instead of Starfleet. Saavik leaves the ship aboard the Galileo 3 shuttlecraft, which has been modified with a warpsled. Once Saavik engages the warpsled, Scotty energizes the transporter to transmit Kirk and Bryce inside the wormhole where they find a highly-armed Klingon space station.

years prior to 2285
Tensions grow with the Klingon Empire, abated only by the Organian Peace Treaty. (prior to episode/novelization)
stardate 8141.5, 2285 (2280s chronology, continuing Enterprise voyages)
Enterprise returns from Mutara. 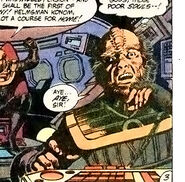 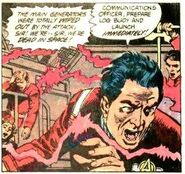 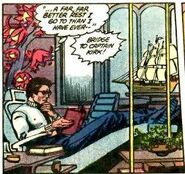 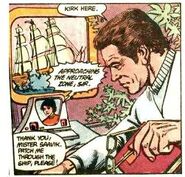 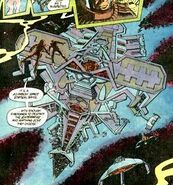 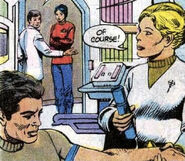 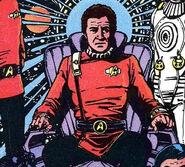 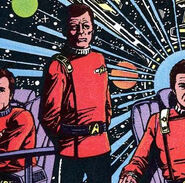 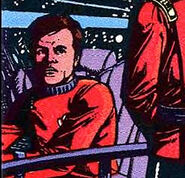 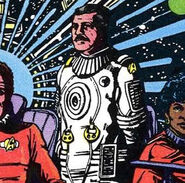 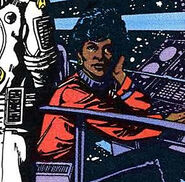