The Worst of Both Worlds (comic)

The Worst of Both Worlds

The Next Generation (DC monthly series) No. 47

The Complete Comic Book Collection; Best of the Borg

2369
The Worst of Both Worlds is a Star Trek: The Next Generation comic published by DC Comics in 1993. The comic was written by Michael Jan Friedman and illustrated by Peter Krause and Pablo Marcos. The story is the first issue in a four-part arc in which the Enterprise crew find themselves in an alternate reality where the Borg successfully assimilated Earth when the events of "The Best of Both Worlds" played out less favorably for the Federation.

Captain's Personal Log
We will arrive at Mardion Three right on schedule to deliver our cargo of equipment and supplies. Hardly a mission fraught with intrigue. And yet it does intrigue me. After all, Mardion Three is near Wolf 359-- the site of Federation's disastrous stand against the Borg. The grim evidence of that stand still haunts the place... A reminder of how vulnerable we were... And perhaps still are. After all, the Borg continue to pose a threat. the fact that they were turned away once doesn't mean they'll leave us alone forever. Someday they may be back. And we can only hope that we'll be ready for them. For me, of course, there is an even more chilling dimension to what happened at Wolf 359-- for I was one of the invaders. As Locutus, I was a focus of the Borg mind-net-- its spokesman in all dealings with the Federation... ...Even though there was a human consciousness still alive inside me, refusing to be absorbed into the Borg Collective. To be trapped in that maze of cold equations... That slaughterhouse of individuality... The very thought of it still makes me shudder. But then I escaped that living hell, didn't I? Locutus is no more a historical footnote now. 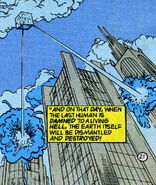 The site of the Battle of Wolf 359