The Original Series (US Comic Strips) No. 12

7731.1 - 7752.3
"The Wristwatch Plantation" is a Star Trek: The Original Series comic strip. It is the 12th story in the US Comic Strips series, published in daily newspapers over a period of 20 weeks by the Los Angeles Times Syndicate. The story was set during Captain Kirk's second five-year mission aboard the refit USS Enterprise (NCC-1701). It was co-written by Larry Niven and features the return of the Kzinti introduced in TAS episode: "The Slaver Weapon". In this epic story, a Kzinti warship attacks the Enterprise with a devastating new weapon.

Omnibus teaser
Investigating the fate of a Bebebebeque colony on Mimit, the Enterprise faces Kzinti invaders.

Captain's Log: Stardate 7731.1.
Medical and psychiatric personnel, as well as a sociology team, are remaining on Iskonia to help Lyra and her people to adjust to their new lives. Lt. Marsha Latham and her men are recovering from their ordeal in sick bay, as we proceed to the Neumenedes star system for a well-deserved R&R.

Before Kirk can complete a sentence about their upcoming shore leave, Uhura receives a priority message from Starfleet ordering them to divert immediately to Starbase 18.

Captain's Log: Stardate 7738.5.
R&R has been delayed by a priority mission. We are proceeding to the planet Mimit, in the Zeta-Sagittarii system, with V.I.P. passengers — a delegation of high-ranking Bebebebeque. Because of their stature in the Federation, the Enterprise has been temporarily placed under the supervision of Starfleet Colonial Operations. We have been diverted from normal patrol to determine the fate of a Bebebebeque colony established on Mimit approximately 15 Earth years ago.

En route at warp three on a week-long trip to Mimit, the crew and the Bebebebeque encounter difficulty working together, with the diminutive insectoid species darting about in small anti-grav sleds to avoid the (to them) massive humanoids. As McCoy explains, they have "a real fear of being stepped on" and "feel safer at our eye level."

Captain's Log: Stardate 7739.1.
We are en route to the Zeta Sagittarii system with a delegation of Bebebebeque aboard. Our orders are to investigate the fate of their colony, established on the planet Mimit 15 standard years ago. Because of their special needs, and their importance in the Federation, certain areas of the Enterprise have been converted for their use. But despite those efforts, difficulties have arisen among my crew — most notably a fatigue syndrome Dr. McCoy has labeled Bebebebequephobia.
Captain's Log: Supplemental.
A fatigue syndrome, which Dr. McCoy has labeled Bebebebequephobia, is decimating my crew, and I am critically short of personnel to run this ship.

Sickbay overflows with crew freaked out by the Beeks, but Kirk is hesitant to take action. The species is known for being sensitive and taking offense, with the result being losing them as a trading partner. Kirk is ordered "not to offend them in any way." Meanwhile, the Beeks find themselves more comfortable with engineers, offering to build a miniature component for Scotty to improve the signal strength of the transporter and modifying phaser controls in the auxiliary control room.

Captain's Log: Supplemental.
Tensions between my crew and the Bebebebeque continue to escalate everywhere except in Engineering. Starfleet has authorized experimental modifications to the transporter and auxiliary phaser controls, and it is my theory that activity accounts for the lack of hostilities there. However, we are due to arrive at Mimit in one standard week. Lieutenant Commanders Uhura and Sulu are wagering we will not make it without a major incident elsewhere on the ship.

Deciding to consult the Beeks expert that came aboard, Kirk meets with Chief Alienologist Mernat, who is a Ferreth, a race that has been trading with the Beeks longer than the Federation.

Captain's Log: Supplemental.
Only Mr. Spock and I know the real reason for the presence of the Ferreth alienologist, Mernat, aboard the Enterprise. Some of my crew may be involved in smuggling a canister of an illegal drug known as theep onto the ship using the confusion caused by transporting the Bebebebeque to Mimit as a cover.

Fearing tipping off smugglers, Kirk and Spock agree not to alert security about the potential threat, leaving them as the only ones to help Ferreth.

Captain's Log: Supplemental.
Only Mr. Spock and I know the truth about Mernat, the Ferreth alienologist... He is here as an investigator. Some of my crew have smuggled a canister of theep... thiotrichloride ethepeptine... onto the ship. The drug is a hormonal stimulant affecting only Ferreth males, who kill for mating priviliges as Vulcans do. But, more important, if the drug is here, it is a danger to the ship. Theep is an unstable and highly corrosive substance that will quickly eat through any material... including its own container!

Mernat spends much time in the cargo bay looking for patterns indicative of smuggling. His instincts are proven right. Afraid of being detected, Lucy urges her smuggling partner, engineering Ensign Mike Carpenter, to move a theep canister from its hiding place in the cargo bay before the Beeks discover it while taking apart loading machinery.

Captain's Log: Supplemental.
A fist fight has broken out in the enlisted crew mess hall. Up to now, sporadic arguments involving the Beeks and my crew have been averted, and I only hope this incident is not an indication of a new behavioral trend among ship's personnel...

Taking advantage of the distraction, Mike Carpenter and Lucy retrieve the theep canister hidden in the cargo bay. But as they hide it behind a panel in auxiliary control, they are discovered by Pete Conroy. They coax Conroy to partner with them, promising wealth when they arrive at their next port, Cyonis IV, but only tell him about one of their two theep containers.

As Kirk assigns disciplinary action for the brawl to Scott, they are interrupted by a yellow alert. Uhura recognizes an approaching vessel as a Kzinti warship. It has a old-style warp drive and is armed with lasers and particle beam cannons in violation of the Treaty of Sirius.

Captain's Log: Stardate 7748.5.
Everyone aboard the Enterprise is experiencing an intense pain, much like that of a migraine headache. According to Mr. Spock, it is because our minds are being read by a Kzinti telepath…

Spock urges the crew to think of eating raw vegetables, but it isn't enough to stop Telepath aboard the warship Giant Killer from learning all about the starship's mission. Needing to prevent the Enterprise from reaching Mimit, Fth-Captain prepares to fire his ship's new weapon.

Captain's Log: Supplemental.
Despite my full report of the incident with the Kzinti telepath, Starfleet has ordered us to the Bebebebeque colony on Mimit without investigating the purpose of the armed Kzinti warship...

As Sulu prepares to depart at warp four, the theep canister hidden in auxiliary control starts leaking, causing circuit failures. Scotty and Chief Engineer of the Seventh Nest locate the trouble, but shields won't respond as Giant Killer fires Hamstringer, a beam weapon that shuts down the Enterprise's gravity.

Captain's Log: Supplemental.
The Kzinti weapon has burned out our artificial gravity generators. Without them we are forced to operate the Enterprise while contending with the true weightless condition of outer space. Our malfunctioning deflector shields and phasers, coupled with this new problem, make it necessary for us to retreat from the Kzinti. Our speed is the only effective weapon we have.

Giant Killer's engines are no match for the starship. Fth-Captain urges Flyer to get their speed up to warp 3.8 to pursue as quickly as they can.

Captain's Log: Stardate 7749.2.
Cruising at warp ten, we have accomplished an ignoble but successful retreat from the Kzinti warship, and we are proceeding to the Bebebebeque colony on Mimit. Gravity has been restored to some areas of the ship, and repairs are under way on the malfunctioning phasers and shields. We have also found the cause of those malfunctions... a leaking container of theep hidden in auxiliary control...
Captain's Log: Supplemental.
The Enterprise's artificial gravity generators have been repaired and partial power has been restored to our deflector shields with the help of the Bebebebeque engineers. We are now due to arrive in the Mimit system in a few hours, and I have called a meeting in my quarters to inform the landing party.

Carpenter finds their other theep canister leaking into Transporter 3's circuit junction. He is confronted by Pete Conroy, and, angered by the sight of a second canister he hadn't been told about, a fight ensues. Mernat had followed Lucy and both saw the fight, but vapors from the theep affect Mernat and he goes into a killing fever. The transporter short-circuits and beams Conroy and Carpenter into space. Lucy is caught by security, McCoy injects a counter-agent into Mernat, and a team spreads foam to stop the Theep from dissolving through the deck.

Captain's Log: Stardate 7750.3.
Due to a transporter malfunction caused by a second leaking container of theep, the landing party, consisting of myself, Lt. Commander Sulu, Lt. Marsha Latham, and the First High Councilor and his Nest, are going down to the surface of Mimit via shuttle. The fate of the Bebebebeque colony, established there 15 years ago, remains a mystery...

The team heads down in a SW7-class shuttle with a warp sled. A ground-based defense squadron of Kzinti fighters launches from the surface. Its flagship, Blood Gnat, attacks the Enterprise with particle beam cannons while their rear guard tackles the shuttle. The shuttle fires phasers in response, but a direct hit sends it spiraling out of control. They manage to separate the shuttle from its warp sled but it plummets and crashes on the surface.

The Beeks are uninjured and try to revive the humans as a large creature starts ripping through the hull to eat them. Fumbling with Lt. Latham's phaser rifle, four Beeks are able to stun the creature. The humans revive and call the ship. Their signal is intercepted by the Kzinti base, which sends out a hunting party to kill them. Mimit Beek colonials, slaves on the base, are ordered to assist, but secretly they alert hidden compatriots who beam over to the shuttle.

Captain's Log: Stardate 7752.3.
The Bebebebeque colonials have warned us that a Kzinti hunting party is on its way here. We are making use of the colony's hidden transporter base to escape...
Captain's Log: Stardate 7752.3.
15 years previously the Bebebebeque colony on Mimit was nearly destroyed by Ravagers. The Kzinti, coming to Mimit to hunt these animals, saved the colonists, then enslaved them.

Now in the colony's hidden transporter base with knowledge about how to defeat the Hamstringer weapon, Kirk relays that information to his ship. Their hidden base is located directly underneath the Kzinti's base, however, and Kzinti trace the signal. But the creature, a Ravager, is part of a large, starving herd of hundreds that has followed the Kzinti hunting party back to their base and starts storming it. The Kzinti are too busy fighting the Ravagers to worry about Kirk's team.

Learning that there are Beek slaves on Giant Killer, Kirk conceives a battle strategy. Sulu and Latham locate a Ravager group and get its coordinates. Giant Killer's Beeks prepare to drop shields at the right moment. With the secret transporter, Beeks then beam Ravagers onto Giant Killer's bridge, sending the ship careening out of control. 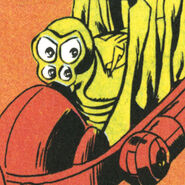 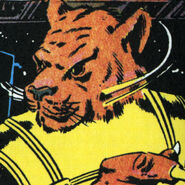 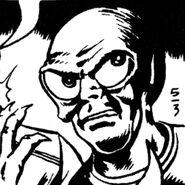 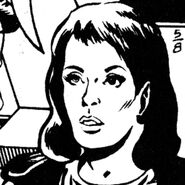 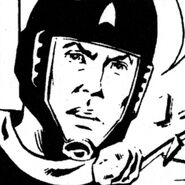 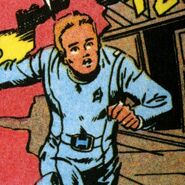 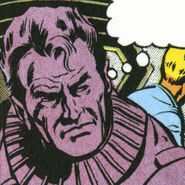 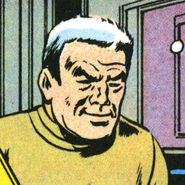 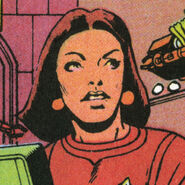 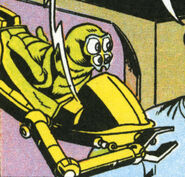 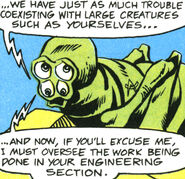 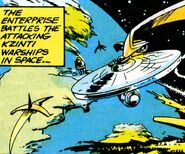 Kzinti fighters with a SW7-class shuttle and warp sled. 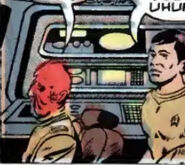 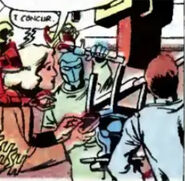