They stand helpless before an alien who dooms them… to infancy! – "The Youth Trap" was the eighth issue of Gold Key Comics' TOS comic book series. It was the last of eight stories written by Dick Wood and the sixth drawn by Alberto Giolitti.

The crew of the Enterprise find themselves guinea pigs for a crazed alien who possesses a fantastic machine! And it appears that no power in the universe can prevent the bizarre transformation of Captain Kirk's men as one by one, they begin an incredible return to infancy!

Captain's log, stardate 31:09.5 - Enterprise under full power in Galaxy Zekbran to investigate the sighting of an uncharted planet. All systems operational…

A mysterious force strikes one of the Enterprise's engines, damaging it and burning out the filament parts required to repair it. The crew has no choice but to beam a landing party to the planet's surface in search of zutotanium to make more. Burns and Lane discover some, but are struck by an energy beam that turns them into children. Kirk, Spock and McCoy beam down to investigate and find two men firing beams at them, one of which strikes McCoy and turns him into a teenager. The de-aged crewmembers are beamed back up while Kirk and Spock make their way towards their attackers; Kirk is struck as well, but is not de-aged. One of the men begins fighting the other and forces him off a cliff. Kirk and Spock rescue the fallen man, who reveals himself to be Laiko, a scientist from Galaxy Trann. He was a member of a starship crew which crashlanded on the planet; an attempt to restore power to the engines resulted in the creation of a machine which reversed aging. They tested it on the Starfleet officers with the intent to learn how to halt the aging process in themselves so they could live long enough to repair their ship or be rescued. Kooba, the man who fought him, uses the age-ray to seize command of the ship's crew, and has them capture Kirk, Spock and Laiko when they accidentally reveal themselves.

Kooba reveals that he intends to use the age-ray to take over his home planet when he returns there after capturing the Enterprise. He has Kirk and Laiko imprisoned while he, Spock and Gorg are beamed up to the ship. Kooba uses the ray on the ship's TV circuits to de-age the crew all at once, but slows down the process so that they will not become babies for a few more hours. He returns to the planet to de-age Kirk, but the captain uses a metal plate to reflect the beam back to Kooba, causing him to de-age instead. With Laiko's help, he returns to the Enterprise, knocks out Gorg and reverses the crew's de-aging. With everyone except Kooba at their proper ages again, Kirk destroys the age-ray. The Enterprise's engines are repaired, but Starfleet Command has trouble believing their report. 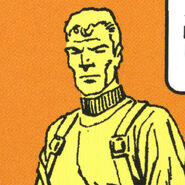