ISBN 1416556397
These Haunted Seas is an omnibus of the first two novels of the Mission: Gamma miniseries

It is a time of renewed hope. As the USS Defiant sails through the wormhole and charts a new course of discovery into the unknown ocean of the Gamma Quadrant, powerful individuals from distant worlds gather at station Deep Space 9 to usher in a bright new era; with the Dominion War now only a memory, Bajor is poised at last to enter the Federation. For Colonel Kira Nerys, Commander Elias Vaughn, and all those who follow them, these are the voyages they were born to undertake.

But where they seek to go is defined by the journeys they have made before, and ghosts populate these uncharted waters—the spectres of lost leaders, fallen friends, forsaken lovers, vanquished enemies, and earlier selves. Some of these shades drive the travelers on, others are drawn inexorably into their wake; but all make their presence felt, and in feeling, the men and women of DS9 and the Defiant must somehow navigate the perilous rapids of their pasts in order to find the future.

Originally published as Twilight and This Gray Spirit - the first two novels in the critically acclaimed Mission: Gamma series - These Haunted Seas is the next chapter of the epic saga begun in Twist of Faith, continuing the chronicles of Star Trek: Deep Space Nine beyond the small screen, propelling its heroes to realms they could never have imagined, and truths they cannot escape. 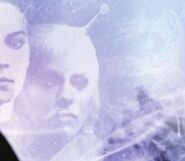