53471.3
This Gray Spirit is a Star Trek: Deep Space Nine by Heather Jarman published by Pocket Books in 2002. It is the sixth novel in the DS9 relaunch and the second in Mission Gamma. The novel centers around the crew of the Defiant encounting an unusual species and getting involved in a dispute, while the Bajorans and the Cardassians begin negotiations on Deep Space 9. The novel was reprinted in the omnibus These Haunted Seas in 2008.

From the back cover

The political intrigue aboard Deep Space 9 ™ escalates when Gul Macet's warship arrives at the station with an unexpected passenger. Cardassian Ambassador Natima Lang has returned to the station on a mission of hope, but it's one that will bring back old wounds and old ghosts. As tensions rise on all sides, Colonel Kira Nerys discovers that the line between friend and foe is narrower than she ever imagined.

Elsewhere, the crew of the damaged Starship Defiant forges an uneasy alliance with an unusual alien species -- one whose unique biological makeup is the key to the balance of power in that region of the Gamma Quadrant. As the crew becomes ensnared in a web of deceit, Lieutenant Ezri Dax and Ensign Thirishar ch'Thane struggle to stave off a genocidal civil war.

The Trager returns to DS9, bringing Ambassador Natima Lang on an official mission of peace and reconciliation between their worlds. She brings a gift to the Bajoran people—the salvaged artwork of Tora Ziyal—in the hopes that Ziyal's ugly dual heritage, disparate dual artistic style, and hopeful message will serve as a beacon toward a new era. While Shakaar focuses on Bajor's entry into the Federation, Second Minister Asarem leads the Cardassian talks, though she adopts a hardline position on every topic, stalling any progress. Both Macet and Lang plead for Kira to act as an intermediary, feeling that she best understands the concerns and situations of all parties. When Asarem officially withdraws from the talks, Kira confronts her and learns that Shakaar ordered Asarem to be as difficult as possible. She wonders how she can be allied with and trust the Cardassians against Shakaar, who is acting increasingly strange. Besides Shakaar, not everyone wants peace; both the peace talks conference room and Ziyal's exhibit are vandalized, and a brawl erupts between Bajorans and Cardassians on the Promenade.

Despite herself, Ro befriends Ambassador Lang and Trill security officer Hiziki Gard; of course both friendships drive Quark crazy, for different reasons. Ro and Quark have their first date: windsurfing and camping in the holosuite. Quark finds the experiences, if not the company, horrendous. They each consider how their futures will be affected by Federation membership and consider lives away from Bajor. The Ohaluvaru movement ("Ohalu's truthseekers") begins to assert itself on Bajor and to champion Kira, though she fears the growing schism within the faith. Vedek Yevir solicits Kassidy for guidance, instead finding an ancient jevonite figure of a Bajoran-Cardassian hybrid that seems to point him in a new direction.

Thriss finds life on the station difficult, spending her days pining for Shar or acting belligerent. Her bondmates fear for the mental state, so Councillor zh'Thane arranges for her ship to be granted standby departure, quietly confiding in Ro about the situation. When Thriss learns of this, she lashes out and stabs Anichent. She is arrested and forced to see DS9's new counselor, Lt Command Phillipa Matthias, regularly. When Matthias believes Thriss has recovered sufficiently, she releases Thriss to her bondmates' care, though their sessions continue. However, when a message expected from Shar fails to arrive, Thriss is greatly distressed.

GQ Backstory: The amphibious Yrythny operate within a strict caste structure. They procreate by laying eggs in the seas; once the young are old enough, they emerge onto land. Those who return to their point of origin are Houseborn, with full rights and privileges. Those who come ashore at another house become second class Wanderers, taken in as servants and given few opportunities. The males are sterilized and the women (whom sterilization would render insane) are prohibited from procreating. Centuries ago, the Wanderers were beaten and killed without consequence; they've since gained some rights and limited government representation, but are thought to be less intelligent and capable, and they are still far removed from Houseborn freedoms. Some Wanderers favor civil war in order to gain full rights.

Yrythny genetic research has revealed that their primitive forebears were genetically augmented eons ago by some unknown advanced race, paving their way to sentience. These enhancements are called the Turn Key, and make them a target of the Cheka, militant imperialists who dominate the region. The Cheka want to enslave and genetically engineer the Yrythny to be the perfect army, and have largely blockaded the Yrythny homeworld, Vanimel, using webs of nanobots hidden in subspace. These webs disable starships and cut off the Yrythny from most of their interstellar trading partners and resources.

Continuing its exploration of the Gamma Quadrant, the Defiant is ensnared in a Cheka web weapon. The Yrythny starship Avaril comes to their aid and offers repairs at their homeworld of Vanimel. Nog is tasked with developing a defense against the nanobots. His solution is even-smaller femtobots which will swarm and block the nanobots from infiltrating the ship's systems, but the demands on the devices will require especially resilient materials. While the crew learn about the societal divisions, Ezri's suggestion of third-party mediation is misinterpreted, and the Yrythny declare her to be the one prophesized to bring about a solution. Despite the Prime Directive implications, Vaughn is forced to allow Ezri to act in a limited advisory role in order to secure repairs and supplies. The Defiant is taken aboard the massive Avaril for continued servicing while they travel to the Matter Consortium, a key trading post next to a particle fountain which produces the raw materials needed for the femtobot defense.

Official Consortium negotiations are derailed by a Cheka agent who offers a backroom trade for cloaking device schematics, which Vaughn refuses. Instead, Prynn agrees to a distasteful session with the "sense artist" Fazzle in order to plant a worm in the Cheka's computers, securing the codes for the needed materials and gaining a map of local web weapons as a bonus. Nog is caught trying to trade the cloaking specs, though he is captured by the spy (informing to the Cheka) that his ruse was intended to flush out. Finally repaired and stocked up, the Defiant launches under its own power and covertly trails the Avaril as a Cheka warship approaches.

Dax, Shar, and a small team remain at Vanimel to work out a compromise with the General Assembly. Confident in her abilities, Dax learns about their history and culture and visits sites around the planet and its impressive orbital ring city of Luthia. One compelling site is that of House Tin-Mal, an experimental Wanderer city that self-destructed, though Ezri suspects that its educationally stunted citizens had been set up to fail. With limited support, Shar studies the Yrythny's unique biology to see if a scientific basis for the castes exists. He is readily befriended by Wanderer Delegate Keren, who secretly takes him on questionable tours, including a terrorist cell meeting and a farm where the Wanderers have been surreptitiously conducted gene mapping for centuries. The latter serves as a boon in Shar's research, though he finds himself reprimanded by Dax for going off the grid without authorization multiple times and for working with Keren, herself suspected of terrorism. With factions of both castes escalating hostilities, Ezri convinces the authorities to stand down and to share Houseborn genetic information for Shar's research, which ultimately proves that the Wanderers are as mentally sound and capable as Houseborn, but also that they are the key to avoiding ultimate extinction. Centuries of Houseborn inbreeding have weakened their genome, while the Wanderers' random mutations are strengthening theirs. He proposes interbreeding to stabilize both castes, along with Ezri's suggestion to establish a well-planned Wanderer colony offworld, staving off overpopulation and resource exhaustion. When many eggs are stolen from a breeding ground, Vice Chair Jeshoh reveals his involvement in the plot. He takes Ezri, Shar, and Keren (his secret illegal lover) hostage, intending to trade the eggs for Cheka weapons to arm the Wanderers for civil war. He directs their shuttle to a meeting with the Cheka warship Ston'yan.

The Defiant crew engineer enough chaos to rescue Nog and confuse the Ston’yan, tricking the Cheka into one of their own web weapons. The Avaril's engineer, Tlaral, is found to have hidden her Wanderer heritage and to have conspired for the trade. Ezri falls back on her counseling skills, convincing Jeshoh to stop the trade and surrender himself in order to save Keren. Jeshoh is imprisoned and Keren is exiled to the planned colony. Dax admits that she still has work to do integrating her various personalities, but is bolstered that Ezri alone was key to providing some possible solutions for the Yrythny. Shar's research is vindicated and applauded, and he hopes to use the Turn Key in his efforts to save the Andorian's biological problems. However, he's crushed to learn of Thriss's suicide. 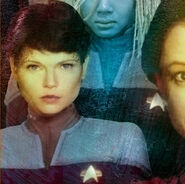 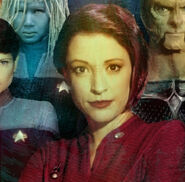 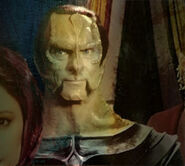 The novel is set in July of 2376, six months after the final Star Trek: Deep Space Nine episode, "What You Leave Behind".