Through the Mirror, Issue 1

Through the Mirror, Issue 1

Through the Mirror No. 1

Space, the final frontier. These are the voyages of the ISS Enterprise. It's continuing mission: To conquer strange worlds, to enslave new life and civilizations… To boldly go where no one has gone before!

PREVIOUSLY IN STAR TREK: THE NEXT GENERATION: MIRROR BROKEN:
There exists an otherdimensional mirror universe, where there is no United Federation of Planets, only a cruel Terran Empire, in which advancement comes through assassination, brutality is commonplace and kindness is weakness. Only twice before, nearly a century earlier, have members of Starfleet encountered denizens of that barbaric realm who had somehow made their way across parallel universes. Until now.

Accompanied by Lieutenants Reese and Hana, Worf beams down to the mining facility on Naia VII for a security inspection, warning his subordinates to be on high alert. The last time they were here proved...eventful. The three are greeted by Captain Ochoa and Lieutenant Amato, the former quickly dispensing with any pleasantries and revealing to Worf that some of the station's equipment and mining haul has begun to vanish. After praising Amato's subtle handling of the situation, Worf begins patrols.

While Reese and Hana find nothing out of the ordinary, Worf sees Lieutenant Jones, an engineering officer, who now sports a beard. Meeting up with his lieutenants, Worf tells them to inform Ochoa of the potential intruder while he pursues Jones. As he leaves, the two redshirts note that the only Klingon in Starfleet doesn't exactly make for a subtle pursuit.

Trailing Jones to a storage bay, Worf engages him in a phaser duel. A voice comes in on Jones' combadge ordering him to abandon the fight and bring the necessary components. Just as Hana and Reese arrive, Jones begins escaping and though Worf clips his shoulder, he is able to escape the bay.

Meeting up with Ochoa and Amato, Worf leads the group through the arboretum to the only place an intruder would go: the transporter bay. As they run through the garden however, Reese is shot from behind by two figures who join Jones. Relentless in his pursuit, Worf manages to reach the trio just as they begin to beam out and sees that Jones' accomplices are... 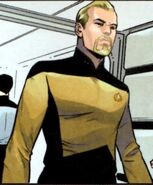