For other uses, see Tigan.

The Tigans were a humanoid species native to the planet Tigan.

The Tigans appearance is for the most part very much like Humans with the exception of having much longer necks. The neck appears to have some significance to the Tigans, Tigan politicians wear a series of golden rings around their necks whilst Tigan security forces sport padded armor to protect the presumably vulnerable area.

The rest of the Tigan security uniform consists of helmets and metallic cuffs over a padded uniform including a tailed coat. They are armed with a variety of hand held energy weapons including the graviton gun.

The Tigans are technically advanced but have maintained an isolationist stance, limiting contact with other worlds. Their planet's power is supplied by a black hole based facility called the gravimatrix. All Tigans are implanted with a device called the interface which delivers information from the Tigan central computer directly to the cerebral cortex, this technology automatically supplies the Tigans with information and entertainment and has eliminated the need for any written history.

Centuries ago when the gravimatrix was being tested, a gravimetric pulse was generated which wiped the central computer. As the information was re-input from physical copies politicians took the opportunity to make a few alterations to Tigan history. Via the interface this new data was delivered straight to the minds of Tigan people. Under the ideal of improving the Tigans this practice was repeated, at first occasionally, ten times in the two centuries preceding 2364, but eventually more frequently, six times in ten years preceding that date. The changes went so far as to eliminate knowledge of any written history to compare the database against and even removing entire political regimes.

One such regime change occurred in 2364 just as an away team from the USS Enterprise-D arrived. They had been invited by Chancellor Lomac but were greeted by Kadec who had replaced him, they quickly discovered the conspiracy, not having had their minds rewritten by the interface like the Tigan populous. The team were promptly arrested but whilst they went about escaping their presence set in motion a rebellious notion in the mind of one of the conspirators. Edic, a man who’s family had been involved with the history changes for generations realized the wrong that was being done and arrested Kadec for crimes against the state.

Edic headed up the next Tigan government and looked forward to a bright future for the Tigan people working with the Federation. (TNG comic: "History Lesson") 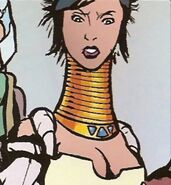 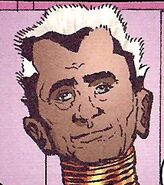