The Original Series (Pocket TOS) No. 39

The Yesterday Saga No. 2

Time in the galaxy has stopped running in its normal course. That can mean only one thing—the Guardian of Forever is malfunctioning. To save the universe, Starfleet Command reunites three of its most legendary figures—Admiral James T. Kirk, Spock of Vulcan, and Dr. Leonard McCoy—and sends them on a desperate mission to contact the Guardian, a journey that ultimately takes them 5,000 years into the past. They must find Spock's son Zar once again—and bring him back to their time to telepathically communicate with the Guardian.

But Zar is enmeshed in troubles of his own, and soon Kirk, Spock, and McCoy find themselves in a desperate struggle to save both their world—and his!

The galaxy is threatened with a number of temporal anomalies, including the destruction of several stars, which threatens to end the universe within months. Admiral Morrow reunites Kirk, Spock and McCoy, who quickly request use of the Enterprise and most of their old crew and travel to the malfunctioning Guardian of Forever, the source of the anomalies. Spock believes someone might be able to communicate telepathically with it, as his son Zar once did, but the telepath who attempts it, D'berahan, is left catatonic.

The only option is to retrieve Zar. Spock examines Sarpeidon's history and learns Zar died in battle. He, Kirk and McCoy travel back to a point shortly before in the hope of retrieving Zar at the end of his life. Zar has risen to ruler of his valley but three armies are attempting to plunder its resources. Zar's advisors convince him to abduct Wynn, the daughter of one of his opponents, who is due to prophesy on the battle and has already made a prophecy hinting at his death. Zar asks her to marry him, since it will cause her father to change sides and is they lose the other rulers will be willing to leave her to rule the valley instead of massacring his people. The empathic Wynn, sensing his good intentions, agrees. Despite only intending it to be a marriage of convenience, they soon fall in love and spend their wedding night together.

Wynn convinces Zar to return with Kirk, Spock and McCoy on the eve of the battle and then come back to her later. He is able to meld with the Guardian and learns it was retrieving its Originators, who want to spend their last millennia of existence in their own universe and find their home planet. However, Kirk and the others worry that their search will cause more damage and the more reasonable Originators and the Guardian are convinced to return them to another plane. Zar spends a few days on the Enterprise during which McCoy heals an old leg wound (fulfilling one part of the prophecy's conditions for victory) and Zar helps Spock and Uhura bring D'berahan out of her trance.

Zar returns to his own time and leads his army into battle, defeating rival ruler Rorgan Death-Hand who once killed Wynn's husband and son in single combat. Spock also goes back to help and, although Zar is wounded, Spock is able to impersonate him apparently returning to the battle healed, fulfilling the prophecy and causing the opposing armies to flee. Spock says his goodbyes to the recovered Zar and Wynn and returns to his own time. 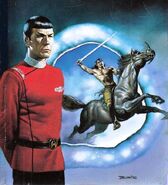 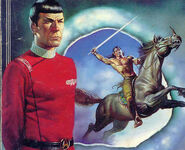 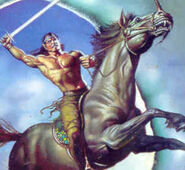