The Original Series No. 40

In a remote area of Federation space, the Enterprise picks up an urgent distress signal—from a Klingon vessel! Tracing the SOS, the crew finds the Klingon cruiser Mauler, trapped in a dimensional storm of unprecedented power. Yet paradoxically, the ship refuses both the Enterprise's call and offers of help.

Determined to discover what the Klingons are doing in Federation space, Kirk beams aboard their ship with a security team, just as the storm flares to its highest intensity. As the bridge crew watches in horror, Mauler vanishes from the Enterprise's viewscreen.

And James T. Kirk awakens, one hundred years in the future!

The Enterprise picks up a distress call from a Klingon starship trapped in a storm near Tholian space. Curious about their presence, Kirk beams over with a security team, intending to take the Klingon captain back with him using an emergency transponder. However, the ship disappears before they can be retrieved.

Kirk recovers to find himself at a Klingon base a hundred years in the future. The base commander, Morith, explains that Humans and Klingons are now allies. Kirk begins to accept his situation and begins a relationship with Klingon scholar Kalrind. The Klingons explain that peace began when a Klingon peace mission was stopped by a Federation fleet only for Kirk to appear aboard their flagship and convince Starfleet of their good intentions. Morith intends to take a group of ancient Klingon ships back in time to fulfil this part of history.

The meeting occurs but Kirk becomes suspicious of the Klingons and has the Enterprise beam him and Kalrind aboard. Spock has already discovered that a scientist aboard the ship is an undercover Klingon, using medication to repress their aggressive tendencies. The same method has been used by the Klingons Kirk met: He never travelled in time but was instead beamed aboard a cloaked ship, the whole incident being a set-up to trick him into bringing the Klingons to Earth. Kirk uses Federation reinforcements to turn Morith's fleet back and returns Kalrind to them after she has rejected her feelings for him. 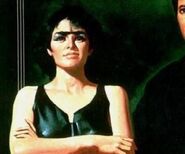