To Err Is Vulcan

To Err Is Vulcan

9126.1
To err is Vulcan! – "To Err Is Vulcan" was a Star Trek comic book story published by Gold Key Comics in 1979, the 59th issue of Gold Key Comics' 1967 series of Star Trek TOS comics. It was the last of 21 stories written by Arnold Drake and the 20th drawn by Alden McWilliams.

In the story, Spock made not one, but two errors. James T. Kirk suspected a plan to discredit Spock, and had a plan of his own to figure out why.

The intellectual achievements of Mr. Spock are legendary throughout the United Federation of Planets… and beyond! But when that great mind suddenly turns foolish, the danger is beyond reckoning!

The planet Njura had long reigned over an empire, but an uprising led to disarmament, democracy and freedom in 2260. James T. Kirk, Spock and Leonard McCoy beamed down for a protocol visit and met the former emperor, now President Kring, who was cross-breeding bees. He assigned Doctor Mlany Rdal as their tour guide. They rode an electric car to one of the planet's nuclear fusion reactors. But when they checked a monitoring station, Spock calculated that two generators were about to explode and destroy half the planet. Rdal assured him that everything was safe.

Spock cut power to 100 million Njurans, but a review of the data records showed that the equipment had been running safely, and that Spock apparently transposed two numbers in the data. Later, during a tour of the meteorological center, Spock saw that a tornado was headed right for their city. But Rdal confirmed that there was in fact no tornado, and Spock noted that an indicator had changed direction. Kirk placated a frustrated Rdal by having Spock return to the ship.

The next day, Rdal took Kirk and McCoy to a tenth anniversary peace parade, which featured fireworks, agricultural aircraft spraying perfume, and a formation of farming combines. The outer skins of the combines suddenly melted, exposing disguised tanks. Spock had planted thermal charges on the vehicles to publicly expose Kring's plan to reconquer his former empire. Spock further hampered the president by disabling the weather center and power plant. In a large stadium, Kirk saved face for Kring, announcing that the president had foiled the conspiracy. Later, Rdal said she had been unaware of the plot, and that Kring's advisors had orchestrated events to discredit Spock in order to prevent the Vulcan from figuring it out. Kirk had sent Spock back to the ship so he'd be able to investigate more freely.

the galaxy (Alpha or Beta Quadrant) 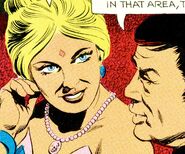 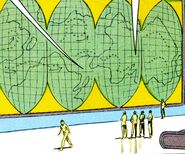 Map of the planet Njura. 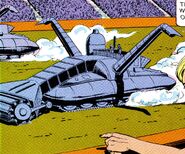 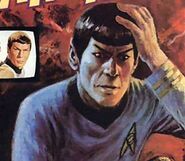 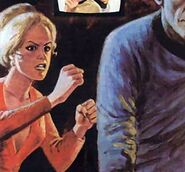 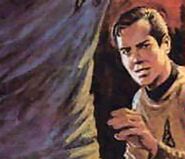