unknown
"To Swiftly Go..." was an 18-page Star Trek: The Original Series comic strip. It was the 30th weekly story arc in the UK comic strips series, published in nine installments in Valiant and TV21 in 1972. In this story, a landing party visits a planet of giant humanoids.

Omnibus teaser
The Enterprise crew visits Kwettir, whose natives are ten times normal human size. Shot down by a hunter, the officers are captured by a giant child and nearly consumed by a massive spider.

Leaving Pavel Chekov in command, James T. Kirk, Spock, Leonard McCoy, Montgomery Scott and a pilot head to a diplomatic mission to meet Governor Antar of Kwettir. While traveling via shuttlecraft, an enormous bird swipes at the ship. Scott is forced to shoot it with the ship's phasers, but it lands next to a hunter who thinks the shuttle might be a hawk and fires at it with his rifle. The back third of the shuttle is instantly shredded, but luckily the shuttle crash-lands in water. Although the pilot dies, the others make it to shore, realizing that everything on the planet is on a huge scale relative to them, with the Kwettirian humanoids being more than 100 feet tall.

They ignite a fire so jetcopters will notice them, but instead a boy named Togor stuffs them in his pocket, then leaves them in a jar in his bedroom. As Spock tries to repair his communicator, a curious spider climbs onto the jar. The landing party is able to roll the jar over and shatter it against the floor. Returning, the boy hears the noise and swats the spider. He puts Kirk, Scott and McCoy onto a toy train, but Spock remains hidden. Realizing his shipmates could be killed by the relatively high speed of the train on the oval track, Spock fires a toy cannon at the boy to draw his attention. It works, allowing Kirk to disable the train engine with a well-aimed phaser blast, and they all manage to slip away under the bedroom door.

By this time, Antar's aide Clorac has figured out the size differential. Antar updates Chekov, then makes a public broadcast on television asking citizens to look for the visitors. Togor overhears and tells his parents the tiny people had been in his room, but had escaped. Meanwhile, the officers have made it outside, but are cornered by a group of ants. Spock's translator communicator at last begins to work, and by using its amplification circuits the boy hears them and saves them from the ants.

Later, the landing party attends a reception and conference, with Kwettir expected to sign a friendship treaty with the Federation. 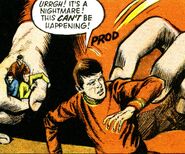 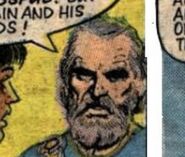