Too Long a Sacrifice, Issue 2

Too Long a Sacrifice, Issue 2

Too Long a Sacrifice No. 2

With the murderer still on the loose, the inhabitants of Deep Space 9 are starting to divide into factions, made even worse when the Ferengi government gets involved. To make matters worse, conflict between Constable Odo and the Federation's hand-picked criminal investigator threatens to derail the investigation itself! The DS9 murder mystery continues in this new space noir.

A bomb has ripped through a restaurant called Lavin's Eatery, killing eight people and injuring dozens more. With the Dominion War raging on, terrorism is the chief concern, but Constable Odo thinks there may be a more personal motive at play. After discovering the bomb contained rodinium darts that were smuggled aboard DS9, his investigation leads him to Quark, now suspect number one in the bombing...

Quark denies being behind the bombing of the restaurant but Odo tells him that as well as Lavin, the Nausicaans have also accused him of being responsible.

Odo is called to the habitat ring by Bashir. A Bajoran man called Keidan Nri has been found dead there, stabbed to death. Bashir notes the murder was particularly brutal.

Odo and Worf question Garak, who Keidan purchased from the day earlier. Like Quark, Garak denies involvement in the murder and the bombing. Later Chief O'Brien expresses his own doubts that Garak was behind the bombing, but Odo comments that as Garak destroyed his own shop before he is ruling nothing out.

Worf suggests taking a different tack in the investigation and he and Odo's deputies crack down on criminal elements of those visiting the station and the two Nausicaans who accused Quark are themselves arrested for smuggling contraband goods.

Major Kira advises Odo that Vedek Teler wants to speak to him about his investigation. The Vedek informs Odo that Keidan was a collaborator who got rich during the Occupation, a possible reason for his murder,

While Odo's investigation continues, a Ferengi trade delegation is on the station for discussions on assisting the Federation in the Dominion War. When Major Kira goes to.fetch them from their quarters, all three begin to choke and die immediately. Bashir discovers that the men have been poisoned. As a response, Starfleet assigns a Betazoid detective called Retlaw to work with Odo to solve the case. 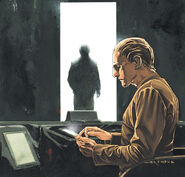